Home TECH AND YOU Google Pixel: A Brief Overview 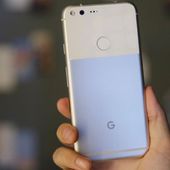 Gone are the days when only IOS backed phones were the high-end gadgets that one would own in order to make a statement. With the launch of the new Pixel and Pixel XL, the phone by google- made by google, there is a new competitor for the iPhones and Galaxy Notes. Let’s find out if the phone is worth all the sensation it created or not.

The Pixel combines hardware and software made by Google, including all the signature Google apps, to bring you a fast, seamless, and easy-to-use experience. Google boasts that pixel is the first phone with built-in Google assistant synonymous to apple’s beloved, Siri. With the Google Assistant you can easily get answers to even the most mundane of your questions, manage everyday tasks make calls or send messages and a lot more just by the virtue of your voice commands. The Google Pixel also debuts with Android 7.1 out of the box.

A first glance at Pixel might remind you of apple’s iPhone or that of HTC. The choice of materials is great, the Google Pixel is made of an aluminum chassis, much like the HTC 10. However, the Google Pixel has a softer feel while the HTC 10 felt harder and edgier, but somehow still works ergonomically. The phone weighs much lighter than what it looks like.

The Pixel XL has a 5.5-inch 1440×2560-pixel screen, whereas the Pixel steps down to a 5-inch panel at 1080×1920. Both promise 100 percent NTSC color gamut reproduction and true blacks, and while we can’t speak for the smaller one, the Pixel XL’s screen might be one of the best we’ve ever seen on a smartphone. It’s bright and crisp, with natural-looking colours.

The Google Pixel carries a non-removable 2,770 mAh battery. Quick charging is supported, and Google supplies a hefty 18W charger. Also in the box, you’ll find Type-A as well as Type-C USB cables, a small USB-OTG adapter. On a whole the battery life is pretty pleasant.

One of the most talked of feature of Pixel is its camera. With a best-ever 89 DxOMark Mobile score, Pixel’s camera lets you take brilliant photos in low light, bright light or any light.  It scored the highest DxOMark number of any smartphone it has ever tested. The best feature of the Google Pixel’s camera (as well as the Pixel XL) is HDR+. The rear camera has a single 12.3-megapixel sensor with 1.55µm pixels plus phase detection as well as laser autofocus. There’s also an 8-megapixel camera in front.The camera app is the same one we find in the Nexus 5X and 6P. The viewfinder is quite simple, yet you still have access to flash, white balance presets, HDR+, grids, and a self-timer. There are a couple of extra camera modes as well, like Photo Sphere, Panorama, and Lens Blur (which simulates a shallow depth of field for that uber blur effect).

It is easy to see that Google has created something special in the form of Pixel and the Pixel XL.  it is the best phone for you if you if android is all you crave for. It’s just pure, unadulterated Android at its best with a killer camera and a good battery life.

Is Technology making us the emoticon of our keypad?

All you need to know about iPhone 7 – To sell or not to sell your kidney?

Save your Girlfriend/Boyfriend, Friends, and Family from Pollution by just a tap