The mankind has made enormous amount of innovations in technical field. Tracing it from several years before the age of agriculture and modern humans, there have been various developments. From the invention of stone tools to metal instruments used in agriculture, there’s a will and desire of humans. Every technology we see today or might see in the future represents the greater capacity of mankind.

Whatsoever these technologies are, at one extent it supports the human activities while on the other extent it degrades the environment.

Let us see some of them

IR is the most popular one used in the contemporary times. It has a tendency to manipulate the waves of the brains to create any experience. This technology is that part of the artificial intelligence which can intervene into our experiences and reality. It can immerse us with any other reality by injecting that reality into our brains. While the BCIs allows for such intervention and manipulation.

This technology could make us more than a human. Our brains are extremely powerful as they control all our cognitions and thinking and learning processes. With this technology we can reprogram our brains which in turn would change and enhance our personality. As in, it would help us to suppress our fears, allow us to communicate telepathically, change our thoughts and experiences and transform us completely.

There are various companies which freezes the dead bodies like “Alcor Life Extension Foundation”, “Cryonics Institute” at Clinton Township and many others.

The technology might appear as extremely sci-fi but it already exists in the contemporary world. It consist of preserving and freezing the dead bodies of the humans with the hope of bringing it back to life in the future when the technology and medicine would be advanced enough. 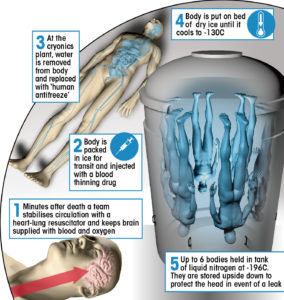 There are few celebrities that got frozen like that of James Bedford, Ted Williams and many others. This technology has enabled the humans to buy their immortality.

Why does it scare us?

It’s believed that people who prefer to freeze themselves try to escape from the nature and divine. A stigma is attached to them for being coward and deluded for not accepting the death and going against the spiritual and traditional beliefs. Although this technology is not yet a full-fledged invention.

Is death comparable to a commodity?

This hibernation is quite expensive as well. After being socially acceptable in the future, the immortality could only be bought by the rich. And the ones who will die will be the poor and marginalized. The quote saying that “once we are dead we all are same” might go false in the coming centuries.

These technologies are the testimony to the progress of mankind. Or we can say failure to the nature. What are your opinions? Please mention in the comment below.

Just imagine how are you going to use such sci-fi superpowers? How will it feel if you are deprived of basic human experiences? What will be the impacts of such technologies on human mind and nature?