Catering to  the unbridled love of book-lovers for literature and poetry, Delhi played host to the Literature Festival for the fourth time. The Delhi Literature Festival was held from January 8 – January 10 this year. Organized at Delhi Haat, the hub of rich Indian culture, the festival attracted lovers of literature across all age groups. It witnessed many prominent personalities ranging from politicians and journalists to budding authors. 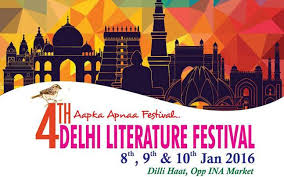 Inaugurated by Delhi Chief Minister, Arvind Kejriwal, the festival opened with the performance by Sufi fusion band ‘ Aanch’ of  Jamia Millia Islamia University on the opening night. On January 8, the revered personalities who enlightened the festival with their presence were Aushutosh Rachna (vision 2021), Kapil Mishra (Minister of Art, Culture & Language & Tourism Government of Delhi), Rama Pandey (actor, producer, writer) and Supriya Ramaji (writer, producer, director). Speaking on the event , Kapil Mishra of AAP said “ The government would take all the necessary steps to make books more accessible to the people and to make writing unconstrained”.

The second day, too, witnessed some more esteemed personalities to be a part of the festival.  In the first discussion on the second day, Omair Ahmad, an Indian writer, told about his published work ‘The Storyteller’s Tale’.  Quoting him “ A story is good because of its story only”.  He said that words should not come in the way of your story. The over-hyped use of high vocabulary makes a story complicated instead. He also added that the length shouldn’t be unnecessarily long. In this context, he very artistically reproduced the words of his English teacher at school – “Your skirt should be long enough to cover the subject and short enough to make it look interesting”.  The next session was by Rakshandha Jalil  an Indian writer whose works are devoted towards popularization of lost Urdu literature. She got nostalgic  about the times where whole conversation between two people used to be in ‘Shayaris’ and how such a scenario has passed into complete oblivion today.

Adding to the strand, the next session had Kumar Vishwas from AAP, post which the audience witnessed a Hindi-language performance by  poet  Richa Anirudh, who is an Indian Prime Time News Anchor with IBN7 Hindi news.  In this session, they deliberated over ‘Populism of Poetry’.

On the last day, amongst the many guests, there was writer Shujoy Dutta.  Shujoy also had a message for aspiring writers- “Read a lot.” He also suggested that one should not only read what one is writing about, but many different things as well. The much looked forward to session on books versus blogs in the flash fiction age took place on the third day.

All in all, the whole festival was very insightful and brought out different facets of writing to the forth. For all the literature-freaks, the intellectual discussions that took place, were extremely enriching as well as engaging.

13 Life-Altering Books to Add to Your Wishlist!

Thriller : “WHAT YOU SEE CAN HURT YOU” ~ Paula Hawkins