Home ADMISSION Undergraduate Admissions to Third cut off have been extended till 4th July.

After the release every cut off, Delhi University allots three working days to the student aspirants to visit colleges and take admissions in their desired courses.

As per the schedule of declaration of cut off, the third cut off was available on 29th June, Friday evening. The admissions for the same took place on 30th June, Saturday which was the first day for 3rd cut off admissions followed by a holiday of non working day ie,. Sunday, 1st July on which no admissions took place. 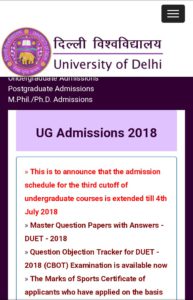 On the second day of third cut off ie,. 2nd June, due to heavy traffice on DU Website the server wasn’t working and thus, fewer admissions took place in comparison to the first day of third cut off! Several complaints were faced by varied colleges as well the Delhi University Dean.

Thus, the admissions to third cut off have been extended for a day!

Now, as per the revised schedule, the admissions will take place both on Wednesday, 3rd July as well as Thursday, 4th July for the third cut-off!