The students of the Economics Honors of the Delhi College of Arts and Commerce (DCAC) issued a recent statement to “oppose the decision of Open Book Exams (OBE) and “stand in solidarity with the countless number of teachers” and students protesting against the University’s decision to conduct online examinations.

The students regarded this decision of the university after countless oppositions being offered by teachers and students alike as a “rude measure” as it is still continuing with the OBE method . They addressed the issues faced by the Kashmiri students who “still do not have access to anything faster than 2G networks” as well as the Amphan-hit students of Odisha and West Bengal who have also faced immediate loses.
The statement also further  accused DU of using links by Amazon while posting links to e-resources and not providing subscriptions to teachers to online meeting platforms; thus, “leaving both students and teachers to fend for themselves.”

The statement further  termed the University’s decision as “rushed,” “along with a disregard to the plight of the students during this humanitarian crisis.” 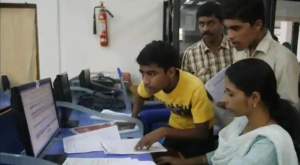 Another important highlight was the completion of the examination process” which usually takes 2-3 months but with the University’s decision to declare the result in a month, “will also rush the process of checking the sheets and declaring results, thereby jeopardizing the marks of the students and also their future prospects.”

The students time and again appeal to the university to address their issues in a proper manner and look for a more convincing as well as ethically feasible alternative which doesn’t compromise on anyone’s need .