This comes as a big good news and a moment for pride for India! International Monetary Fund (IMF) Managing Director Christine Lagarde on Monday appointed LSR alumna Gita Gopinath as Economic Counsellor and Director of the IMF’s Research Department, making her the second Indian after former RBI governor Raghuram Rajan to hold the position. 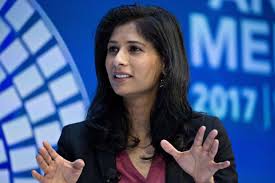 Born and raised in India, Gopinath is now a US citizen and an Overseas Citizen of India. She received her Ph.D. in economics from Princeton University in 2001 after earning a B.A. from University of Delhi and M.A. degrees from both the Delhi School of Economics and University of Washington.