Home DU SPEAK The wave of TROLLING- Gandhi Jayanti!
The father of the nation, Mahatma Gandhi needs no introduction! Gandhi Jayanti is a national festival celebrated in India to mark the birth anniversary of Mohandas Karamchand Gandhi born 2 October 1869. It is celebrated annually on 2 October, and it is one of the three national holidays in India.
Not just in India, but the UN General Assembly announced on 15 June 2007 that it adopted a resolution which declared that 2 October will be celebrated as the “International Day of Non-Violence.”
Mahatma Gandhi was popularly known for his values, teachings and his deeds. He was a person who lived and died for the nation! 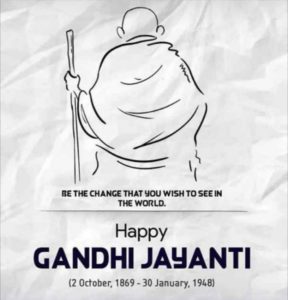 But it is sad to see, that the present generation who has been a victim of ‘trolling’ has now lost all values. It used to be a tradition some 3-4 years ago that mornings of festivals or national holidays were overflowed with texts, tweets and posts on social media with cheerful wishes! But now, the youth seems to be more enthusiastic over the matter, those cheerful wishes are now replaced by ‘trolls’.
Trolls on Mr Gandhi, dancing with British women or pictures showing him drinking/drunk have become the ‘trend of the day!’
The gross situation arouse because of the ‘addiction of trolling’.
It is not only alarming where the present youth is flowing towards in the ‘wave of trolling’ but also highly ‘unethical’!
The question is where are the people who used to shout slogans, turned over to streets, burnt buses, used violence, shattered homes over pitty issues..?
Is it not a matter of concern??

“You must not lose faith in humanity, humanity is an ocean! It the few drops of the ocean are dirty, the ocean does not become dirty!
-Mahatma Gandhi
On 149th anniversary of Mahatma Gandhi, why not reburn the flame of his value ‘truth’ and ‘non-violence’? Because the ‘true patriots’ respect the ideals!