It’s been long since we saw such movies where a villain, a ‘bad man’ gave good lessons! Yeah, that was childhood and just a movie but what if it’s a reality??

Yeah, a day prior to yesterday, i.e. on 29th September, the official Website of DU’s KIRORIMAL COLLEGE got hacked! 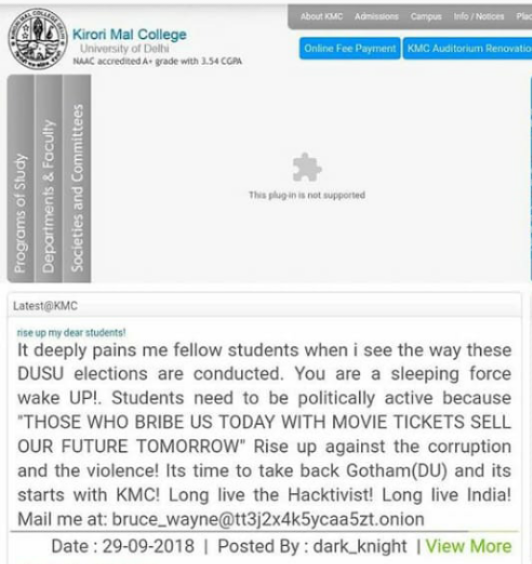 But, what the hackers posted was something unexpected. It read- “It deeply pains me fellow students when I see these DUSU elections are conducted. You are a sleeping force wake UP! Students need to be politically active because “THOSE WHO BRIBE US TODAY WITH MOVIE TICKETS SELL OUR FUTURE TOMORROW. “Rise up against the corruption and the violence!It’s time to take back Gotham(DU) and it starts with KMC! Long live the Hacktivist! Long live India!

The name reads to be dark_knight. Letting alone the fact that he/she is a hacker, what has been done is really am eye-opener. Also, it’s really sad that the ones with true words have to hide under the identity of a Hacktivist and those who favour fallacy are walking fearlessly!