Welcome to Kirori Mal College, an institution of academic excellence, established in 1954, that has always strived to, and successfully maintained its place as one of the finest within the University of Delhi. Set in the lanes of North Campus, KMC has a unique charisma of its own. Filled with positive vibes all around it, the college has the colorful ‘Kamla Market’ set at its back.
The entrance of the college is bestowed with the green, beautiful wide Ashoka Lawn which becomes the relaxing adda for the students in the regular college timings. It indeed makes us one feel the vibrancy of the students sitting and giving shape to various activities in the natural atmosphere of KMC. Located in the front of the entrance is the college building which has the college administration offices and the the various faculties of different courses of Languages and Social Sciences.
In the left of the Ashoka Lawn lies the Library Lawn which often becomes the venue for various department fests and cultural activities. Along the library lawn lays the Seminar Room and the ‘Pradhan Memorial Library’ itself. In the front of Library lawn is the Science Blocks which has a long corridor that runs across the whole block. 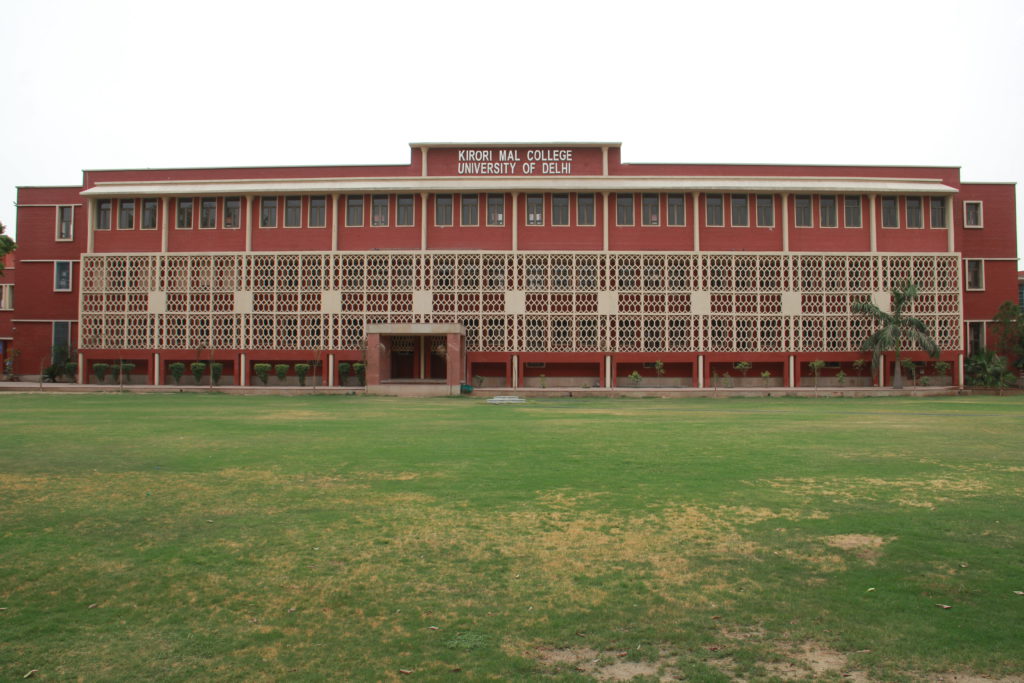 The college has a canteen at its back which provides foods and beverages at comprehensive rates. The students often after their classes grab food, sit, talk and spend quality time on the stone benches of the Canteen area. The college also has a GCR (Girls Common Room) in the main building of the College and a BCR(Boys common Room) in the upper portion of the Canteen building, which provides a private atmosphere, away from all the buzz around.

In the right hand side of the college premises, the college has ‘boys hostel’ which provides residence to around 180 outstation students. Attached to the hostel area is the Activity Center, Gymnasium, The basket ball court and a wide playground. The Hostel entrance has a small canteen that provides light food and beverages for the students. The College also has a stationary shop and ATM facilities for students’ convenience.

Kirori Mal College offers graduate and undergraduate courses in Science, Humanities, Commerce and in languages as well. Kirori Mal College has a distinguished history of sustained cultural activity in drama, debate, music, fine arts, photography, dance and film. These activities are organized through cultural societies, namely, THE PLAYERS, DEBSOC, MUSOC, FAPS, SENSATION,MONTAGE and THE FILM SOCIETY to name a few. Also working on different social issues is the society called PARIVARTAN- the gender forum, which plays a very active role in creating awareness among the students. The organisations such as NCC and NSS also play a very important role in nourishing the students’ potentialities.
The major attraction of KMC is Oasis- ‘Freshers Rain Dance Party’ and Renaissance-The College Annual Fest which creates so much excitement, fun and buzzes around the North Campus.

The alumni of KMC have a list of famous persons who have achieved glory in different walks of Life. Amitabh Bacchan, Satish Kaushik, Kulbushan Kharbanda, Kabir Khan, Sushant Singh Rajput are a few who’ve contributed a lot in the Film Industry. G.P. Koirala, Naveen Patnik, Madanlal Khurana, Pravesh Verma are some of the eminent politicians that are the glorious alumni of KMC. Also M.S. Kohli, Abhay Kumar, KK, Parikrama (the Band), Saeed Naqvi are few of the other famous alumni who’ve contributed a lot in other various spheres.

The talent of young Kirorians seems to create its own benchmark, up in the sky.
They Shine and glitter all the way and make themselves different from others.
It is indeed a very beautiful & learning experience to be a KIRORIAN!