The much awaited and controversial Delhi University Student’s Union Elections held on 12th Sept 2018. Issues of violence and chaos were reported from various colleges from the nomination day and later. All this was expected to end after 12th Sept, the Elections day! 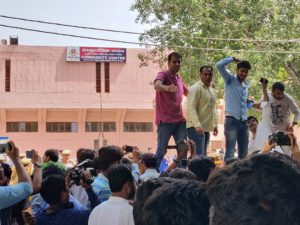 But it seems, this year it had to leave a different mark in the history of DUSU Elections.

But after that, Votes were being displayed on Ballot no 10 in Secretary post. What’s controversial is that, there was no one on Ballot no 10, not even NOTA! NOTA had Ballot no 9 on the post of Secretary.
DU Administration accepted that there’s a glitch in EVM and the counting is suspended for today. It has been said the counting of votes will be resumed tomorrow. But no official date or statement have been released by Delhi University for counting and declaration of result.
Ruchi Gupta, AICC Joint Secretary and Incharge of NSUI claimed that, “We were leading on the posts of President and Secretary, and clearly this is some sabotage to help ABVP!”