It is something unthinkable and loathsome in a modern, civilized society! Profession of cleaning toilets without any protective equipment. Yes, it exists and it is termed as Manual Scavenging. Manual scavenging represents the most inhuman of all professions conceivable.

On September 9, five young workers died of toxic fumes while cleaning a septic tank at an upscale West Delhi residential complex. SKA notes that over 1,760 manual scavengers have died in the past couple of years. 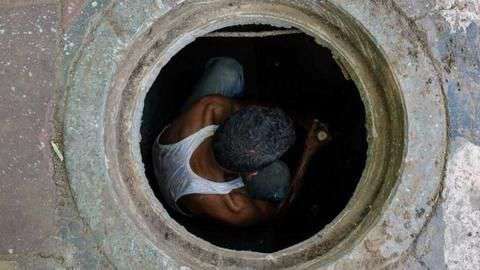 While tragedy and outrage gripped their kin, the incident also highlighted the saga of neglect and exploitation that has come to characterize the story of manual scavengers, even in modern, 21st century India. This wouldn’t be wrong to mention that even after the provisions of the Prohibition of Employment as Manual Scavengers and their Rehabilitation Act, 2013 the suffering hasn’t been reduced.

The Act clearly places an obligation on every employer who employs people to clean sewers/septic tanks to provide cleaners with adequate cleaning equipment, the knowledge to operate them, and safety gear, including full-body suits.

Even after all this, the sad reality is that the count is increasing day by day. A recent survey by the National Safai Karamcharis Finance and Development Corporation (NSKFDC), covering 121 out of India’s 718 districts, counted as many as 53,236 manual scavengers in India – a four-fold increase over the official count of around 13,000 in 2017. Indian Railways happens to be the single largest employer of manual scavengers in the country with 36,176 cleaners. We are stuck with a serious problem!

The focus of the scheme, so far, has largely been on building toilets, which is commendable but what about the cleaners of these toilets. Increase in number of toilets directly means increase in septic tanks and the burden it will have on scavengers.

If bad prevails, there is good too! In June, the Delhi government announced that 200 manual scavengers would be provided with financial help to buy sewer cleaning machines that cost Rs. 38 lakh each which marks some effort in the right direction

Modi’s Swachh Bharat campaign that has spent thousands of crores of rupees on advertising, still remains silent about the issue of manual scavenging. Does this hints the failure of the mission or the failure of authorities concerned? No matter what the truth is but manual scavengers are still suffering and are stuck in this vicious circle of employment.