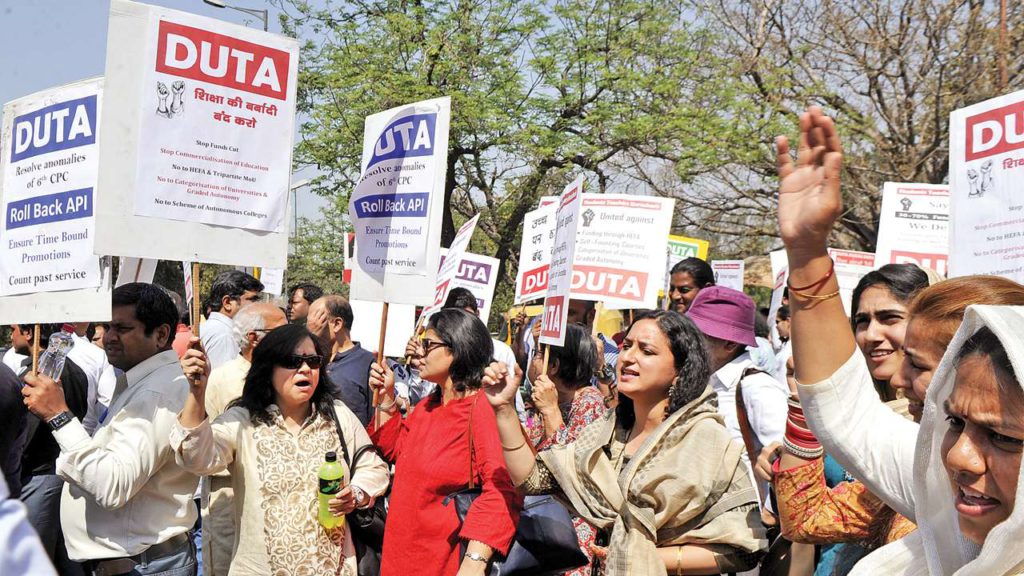 The recruitment process of around 2000 faculty posts in Delhi University (DU) has been stalled due to confusion over the implementation of University Grants Commission’s (UGC) March 5th notification on reservation. While most of the colleges have cancelled the scheduled interviews for the advertised posts, some have started the process using the new formula, which is expected to reduce representation of SCs and STs in the faculty.

The appointment process, that has been pending since 2016, was to start in DU in the third week of March. The university had already prepared the roster following the standard 200-point system wherein the number of reserved positions be calculated by treating the university/institution as a single”unit”. But, after the UGC had directed all educational institutions getting grants-in-aid that reservations for SC/ST teacher posts to be calculated department-wise rather than institution-wise, the process could not move further.

The UGC’s directive was based on an Allahabad High Court directive April 2017. However, following the immense protest against the move, the UGC had filed a Special Leave Petition (SLP) in the Supreme Court to withdraw the order and asked the educational institutions not to hire any faculty member using the new formula. However, there has been no clarity on which formula to be followed while making the roster.

Raising the issue, DU Teachers Association (DUTA) wrote to the Union HRD Minister Prakash Javadekar saying, “Over 4000 ad-hoc teachers currently employed in University of Delhi and its colleges were employed on the basis of 200 point Roster treating College/Department as a unit. Any change in the Roster for employment in the new academic session will result in displacement of a large number of ad-hoc teachers. We appeal to you to direct Delhi University to ensure rejoining of the ad-hoc teachers,” the DUTA said.

However, in its reply the Ministry told the Teachers Body that the matter is “Sub-judice” “You are writing again and again on the issue the details of which you know well. It is not UGC but SC which has directed that the roaster should be department wise. UGC and HRD have filed SLP stating that the roaster should be for University/ college as a unit,” an email from the ministry read.

Officials criticised the Ministry’s respond saying that it has not taken timely preemptive measures, for which thousands of adhoc teachers are “facing acute uncertainty and displacement”. “The university administration followed the line of MHRD and did not call even AC-EC meeting to take stock of this crisis situation. As the situation in DU is unprecedented, the adhoc teachers must be absorbed by an ordinance,” said Rajesh Jha, a professor and an Academic Council (AC) member.