Khaled Hossieni is a widely acclaimed writer, perhaps the most well-known Afghan writer in the world. I first read about him when a weekly magazine I religiously read, printed the snippets of their telephonic interview. What piqued my interest was the fact that he writes historical fiction set in Afghanistan, which isn’t something you come across every day. So when I eyed the ‘A Thousand Splendid Suns’, I made a run for it both literally and figuratively.  The title which has a certain sense of novelty about it only added to my intrigue.  As it turned out later, the title is a part of an English translation of a poem about Kabul, the place where the major part of novel is set in.

‘A Thousand Splendid Suns’ is a hauntingly beautiful, poignant and powerful novel. It touches upon the universal themes of love, redemption, women oppression, forgiveness, courage, compassion and human resilience. The book gives you an insight into an altogether different world. The fact that the writer has written the book from the perspective of the females characters, makes it all the more compelling. But at the same time, the book can be emotionally taxing, leaving you drained and depressed, even reducing you to tears many a times.

The book is set in a war-torn Afghanistan around the time when the country is experiencing the newly-ensued freedom followed by the end of monarchy. The book throws light on the hardships that have become an inevitable part of the lives of people, especially women, of a nation that is torn between the archaic patriarchal way of life and the ideal egalitarianism it hopes to embrace. Its principal characters have been brought together by circumstances, rather than by choice, both of them damaged, tortured yet undaunted survivor of life in their own respective ways.

Mariam, one of the protagonists, has a deep- seated desire to be loved without any inhibitions. She is made to feel apologetic throughout her life for being an illegitimate child, a harami. For years to come she is shown to regret the fact that she disappointed her mother and that it was her act of defiance which spurred her suicide. Laila, like Mariam, is a victim of circumstances. Throughout her childhood, her mother’s inability to love her with same depth and sweep as she loved her brothers gnaws at her. Both of them go on to marry Rasheed, in whom they end up having a sadistic, violent and a callous brute as a husband who derives pleasure from inflicting pain and humiliation on them. Khaled accurately portrays how women suffer when men like Rasheed are at the helm in the patriarchal societies. 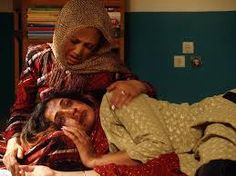 Thousand Suns is as much a story of unsuspecting and innocent people caught in the crossfire of war as it is of love and compassion. Hossieni tenderly touches upon the varied array of issues, without passing any verdict or taking sides. He serves us the slice of life of people of Afghan in the aftermath of war they are caught up in, which the world had deliberately chosen to turn a blind eye to.

Some books stay with us forever and the only way to do justice to it’s memory is by penning down your thoughts on it. No matter how late.