Going against the odds,the Indian Hockey Team this time experimented by playing for the Champions Trophy without some of its key players, namely- Sardara Singh, Ramandeep Singh, Rupinderpal Singh, among others. There were a number of outstanding individual performances that favoured India’s entry into the finals and then, a silver at the 36th FIH Champions Trophy held in London. While Manpreet Singh remarkably held the midfield, Goalkeeper Sreejesh has put in his best possible efforts to stop every goal that could crush India’s hopes in the tournament. 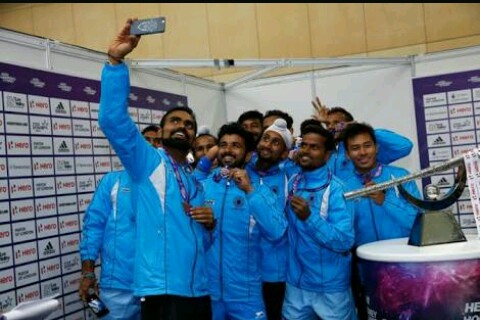 While team India was able to hold Australia goalless after the regulationtime in the finals- largely due to the efforts of Goalkeeper Sreejesh. Unfortunately, it could not strike a win and lost to Australia by 3-1 in a dramatic penalty shootout. But it definitely won many hearts and applauds after a giving a tough competition to the champions in a nail biting match.

The team’s silver, being India’s first medal in Champions Trophy in 38 years, has instilled new hopes among all the Indians for a smashing performance at the Rio Olympics. In the words of former Indian captain, Jagbir Singh, “India is a sleeping giant- if they wake up, no team can stop them. The world hockey must take note of the fact that India is a new giant emerging and all teams need to be wary about it.”

India’s recent success against top teams of Australia, Netherlands and Germany have proved that India can return to the big league of world hockey and may even be successful in striking a Gold at the Rio Olympics. But for now, kudos to Team India and let’s hope for the best at the Olympics.