The left backed, National Students’ Union of India (NSUI) had earlier in its statement urged for promoting the final semester/ year students without conducting examinations. NSUI suggested, the students should be promoted on the basis of their “past performance” with 10 per cent extra marks. The right wing, ABVP launched a Twitter campaign opposing NSUI’s stand and asked the Universities to explore “different modes” of conducting examinations. 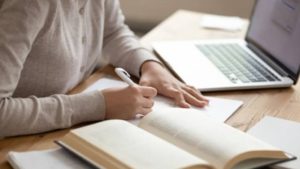 In times of Global Pandemic which demands social distancing, Universities are still undecided in their move regarding the conduct of examinations. Student bodies like NSUI and ABVP have taken an opposite stand in this regard.

While NSUI urged the Universities to promote the intermediate year students to be promoted without examinations, and pass the final semester/year based on their “past performance” with 10 per cent extra marks. As its observed that students tend to improve their performance in final year. It is reported that NSUI has submitted a memorandum to over 20 universities since March.

However, ABVP has opposed the idea of Online Examinations, stating that it discriminates the students who have no access to digital devices.

“We want the institutions to assess students through some form of examination, whether that happens now or a few months from now. The reason why we are insisting on this is that the industry will be hesitant in employing graduating students who have been promoted without an exam,” said Nidhi Tripathi, National General Secretary, ABVP.

As per the guidelines issued by University Grants Commission (UGC), the Universities can decide the mode of conducting examinations based on their circumstances.

Delhi University has decided to hold up an open book- online examinations for its final year students. The decision has met with objection from both the students as well as the teachers.