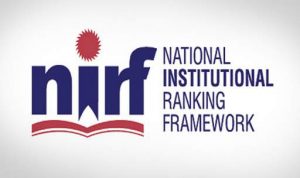 The NIRF Ranking 2021 was released on September 09 by Education Minister Dharmendra Pradhan. Miranda House continued to retain the first rank for the fifth year in a row, followed by Lady Shri Ram College For Women which secured rank two for the second year in a row.

The National Institutional Ranking Framework (NIRF) was approved by the MHRD and launched by the Minister of Human Resource Development on September 29, 2015. Educational quality is measured in Universities, Colleges, and other educational institutions across the country according to the following parameters.

The two most elite DU colleges – Hindu College and St Stephen’s College – have seen a significant drop in their rankings. Hindu’s rank has fallen from 3 in 2020 to 9 this year, Stephen’s has dropped from rank 4 to rank 8. Hansraj College which was at rank 9 last year has been pushed out of the top 10 list with its ranking falling to 14.

The ranking of NIRF is done in ten categories: Engineering, Universities, Colleges, Architecture, Medical, Management, Law, Pharmacy, and Dental colleges are there.

Bijayalaxmi Nanda, Miranda House’s Principal, said,  “It’s very motivating to be recognised. We have consistently worked on these parameters and tried to improve. It’s not just about ranking but also about improving teaching-learning. We have tried to keep the legacy of democratic decision-making going in the college, and our win is due to the spirit of cooperation not competition. This is a win for DU.”

The principal of LSR, Suman Sharma, credited the achievement to the teachers, students and the governing body of the college.

Anju Srivastava, principal of the Hindu College said she was not sure why the college’s ranking fell. Hindu’s score has dropped from 70.44 last year to 66.51 this year, whereas Stephen’s score dropped from 69.67 to 66.71 this year. Both the colleges have seen a drop in scores in all five parameters, with a significant drop in the score of graduation outcomes.

“We are still trying to analyse what led to the drop because there has not been any change from our end. We’re trying to see which are the weak areas where we need to improve. One thing that does seem to have impacted the rankings is teacher-student ratio, which is not very good,” said Srivastava.

Hansraj College has dropped from 67.23 last year to 64.65 last year, with scores dropping in all parameters except RPC. Stephen’s principal John Varghese and Hansraj College principal Rama did not respond to queries regarding fall in rankings.

The Shri Ram College of Commerce (SRCC) which had fallen out of the top 10 colleges list last year by getting rank 12, has climbed up once again by securing rank 10.

“We have done well in research outcomes and graduation outcomes. The latter of which is determined to a large extent by student placements. Our research score is still lower than some other colleges because we are a Commerce college and Science colleges do better in research. This is also affecting our ranking. We have been requesting, therefore, that there should be streamwise ranking which will put us much higher on the list,” said SRCC principal Simrit Kaur.