DELHI UNIVERSITY !! Dream for all especially commerce students but getting through these universities and reaching to colleges like SRCC is surely a herculean task. If securing above 95 percent ensures your entry to these well affiliated institutions then you are living in a bubble. But the system fails to understand the diversity of boards in India with some board offering marks dexterously and others being extremely stern with marking. 50 students from one school getting admission in SRCC with cutoff as high as 98 percent and more than 50 percent of students making to SRCC are to be observed by the State Boards, the statement in itself is a big proof of the incommensurateness faced. And above that the great quota system just acts as a cherry on the cake with cut offs for General being 98 percent and Scheduled Tribe being as low as 88.25 percent but with these high cutoff dreams of many student scoring as high as 97 percent are put to trash. We see a bundle of articles motivating us but in the end each college has its own brand value and reaching in the top most college makes an anomaly.

But instead of understanding the needs of students the colleges have taken these cut offs as a sign of their pride and usually release cut offs which are too high for their own good. Well all know SRCC is the most acclaimed commerce institution and releasing cutoffs higher than them does nothing except adding to the anxiety of students. Colleges like CVS are releasing cut offs equivalent to those of Srcc and Ramjas just crossed the limits releasing cutoff as high as 99.25 percent forgetting that getting new infrastructure doesnot make one the most premium institute it takes a lot of efforts to change one stero type . But another thing that strikes me here is we all have some assumptions like IIT is the best institution or for commerce it`s SRCC but we never tried giving other chances maybe they have better opportunities ensured for one . Owing to our orthodox attitude colleges releasing such high cut offs seems more of a stupidity as its sure to attract no crowd .

Summing up all the innuendos , I would say its high time to revolutionize the system with giving every deserving dream a shot and realising that a single percentage can never be a test of human intelligence and maybe including an interview round make things more clear and simple . And we should stop making one person or one institution as a ultimate judge of success or inspiration and should keep our doors open for all kind of diversity waiting there for us . It was real weird for institutions releasing such high cut offs with student scoring 96 percent having no room in eminent courses in first cut off list and would end up with the hope that one day we cater to needs of student and release more believable and feasible cut offs . 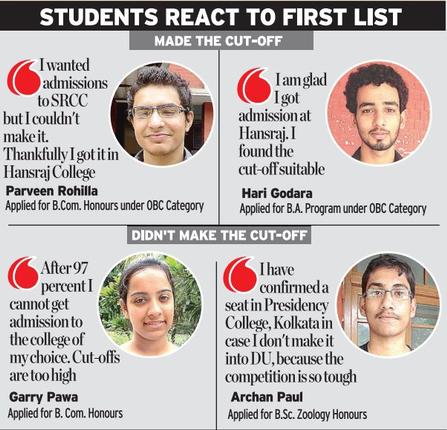