Home BOOKS Harry Potter and the Cursed Child: Everything you ever wanted to know...

The announcement of the play, Harry Potter and the Cursed Child, came as a startling New Year gift for the Potter fandom. The news spread like a forest fire on social media, selling 175,000 tickets in just 8 hours of the opening of booking. After nineteen long years of the closure of the series, it is back with a whole new star cast! Yes, we mean it. Interestingly, sources said that it would carry an entirely different story from the rest of the parts. The idea nurtured when Rowling collaborated with just the right set of experienced people to bring the play on stage.
Playwright Jack Thorne and director John Tiffany are to bring the musical reminiscence forth our eyes, this June. Comprising of two parts, it will have its premiere at the Palace Theatre, London, England. 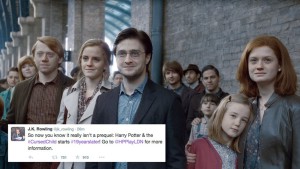 Breaking the ice, let us know who actually is this cursed child? Here, read out the full synopsis.
“It was always difficult being Harry Potter and it isn’t much easier now that he is an overworked employee of the Ministry of Magic, a husband and father of three school-age children. While Harry grapples with a past that refuses to stay where it belongs, his youngest son Albus must struggle with the weight of a family legacy he never wanted. As past and present fuse ominously, both father and son learn the uncomfortable truth: sometimes, darkness comes from unexpected places.”

Thus, having confirmed that it is not a prequel, the character in question is Albus Severus Potter, who made an appearance in Deathly Hallows at the platform 9¾. He is Harry’s and Ginny’s middle child, having an older brother James and younger sister Lily Luna.

The official website, harrypottertheplay.com caught our eye with its captivating color scheme, a blend of yellow and brown. The logo, depicting a little child, nursed in a nest with wings lends a mysterious flavor, lightening the excitement.
One of the most unexpected surprises were the new actors, with Jaime Parker, Paul Thornley, and Noma Dumezweni taking on the roles of Harry, Ron, and Hermione respectively. The choice of Hermione as a Black woman was appreciated by a large number of fans including Rowling herself. Whereas others were a little disappointed as they were accustomed to the “fair one”. 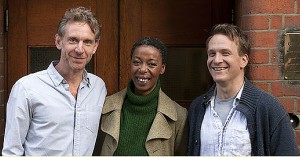 In spite of this, everyone is looking forward to this play, which is to be viewed either on the same day or two consecutive nights. The levels of enthusiasm touch the zenith, as each one of us anticipate how it would turn out to be!