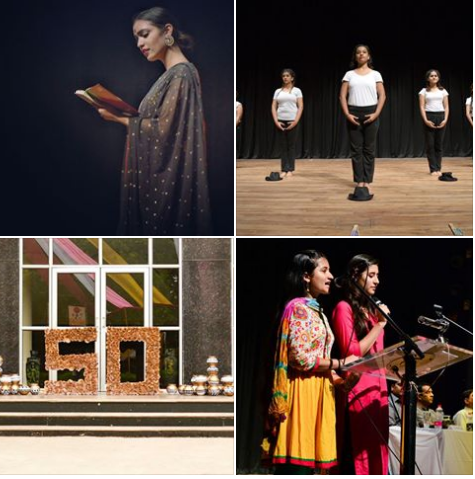 One of the most prestigious and oldest university of the country has many colleges who are about 50, 60, 70 years old and one of them is Gargi College. It is one of the esteemed girl’s college in South Campus, which completed it’s 50 years and celebrated their golden jubilee on 17th Aug, 2016.
The college organized a cultural program in order to celebrate their golden jubilee. The theme of the program was ‘ Service to Humanity ‘. The event had various eminent personalities as chief guests and guests of honor like Mr. Rahul Yadav, founder of Yodhas (Indians fighting against cancer), a UNESCO award winning NGO, Mr. Anshu Gupta, founder Goonj, and NGO that works towards sustainable development, Professor Anil Aneja, ODS Equal Opportunity Cell Gargi College. Mr. Atul Kotra, Chairman of the Governing body of Gargi College and Dr. Shashi Tyagi, the principal of the college were also present. The program witnessed various performances from various NGO’s. Some NGO’s that participated in the event were Yodhas, Youth for Seva, Tamanna, Arya Mahila, Goonj and Jamkhat. An active participation of NGO’s was witnessed because of the theme of the event which was “Service to Humanity”. Not only participations and performance but the NGO’s had also put up stalls in the college and sold their own creations.
The event also had a tree plantation drive, which was lead by the principal of the college Dr. Shashi Tyagi and the guest of honor Mr. Atul Kotra who is the chairman of the governing body, Gargi college. Gargi College was established in the year 1967 and its journey of these 50 years has been depicted along with its excellence in a calendar which was also launched at the Golden Jubilee celebrations.
Gargi college is one of the most prestigious colleges of Delhi University and South Campus. It is the only girl’s college that offers courses in all the four streams be science, commerce, arts or elementary education. In last assessment of National Assessment and Accreditation council (NAAC), which took place in February, Gargi College scored the third highest CGPA in South Campus which was 3.30 making Gargi a Grade ‘A’ College.
Since years the college has been excelling in all the fields. “ College with Potential for Excellence” is the title bestowed by University Grants Commission on Gargi College. The college also has bioinformatics facility, for which it has also received a grant from the Ministry of Science & Technology.
Gargi college completed its journey of 50 years, this event kick started the celebration which will continue during the complete year in some form or the other.
We wish Gargi College to excel and be even more great institution that it is today.