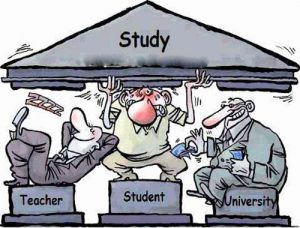 The Current Condition of the Education system in India

The education system of India pressurizes the students to get a good score, which leads to the depletion of student’s creativeness. The no. of producing Engineers in India is more than the population of Switzerland, even the no. of unemployed engineers postulates more speedily than the economy of India. India spends less than 4% of expenditure on education juxtapose western countries and other developed countries, USA and  China spend 6% of expenditure on education.

More than 60% of MBA holder students are unemployed or dissatisfied with their jobs, complications with management, and the way of teaching, lack of professional trainers and professors, distress infrastructure. They are inclined towards the conventional theoretical classroom-based approach.

In an international survey of education, named ACER, India ranked 72 out of 73 countries, students from Tamil Nadu and Himachal Pradesh are among the best-performing state, and India never took part in the exam in 2009 since then. PISA ( Programme for International student assessment) exam, Singapore got the first position among other countries.

Since then Singapore has considered as well education system, as in  India, there is also a rigorous completion among students. There was a system when students feel difficult to compete, he or she free to take part in lower standard subjects but after a survey, it’s imping as it increases division among students leads to decline in the confidence level among students from lower standard subjects, leads the evolution of SBB (Subject-based bounding), under this any student can take additional subjects in which he or she interested.

Apart from this textbooks are in private players, which increases the chances of selection among students to study from sundry books, unlike India, students are limited with NCERTs only, under the control of the government.

Along with this, after secondary education students have to take part in Army training centers, it is mandatory for all students as they believe that the situation of war would be faced any time, so we should prepare for that. 98% of parents are in favor.

History of the Indian Education system

It is approved by the union cabinet of India on 29 July 2020, under its comprehensive framework leads changes in elementary education to higher education, including vocational training in urban and rural areas as well.

Experts said that mains elements of an education system are still missing like focus on the outdated syllabus, improvement of infrastructure, and poorly trained faculty.