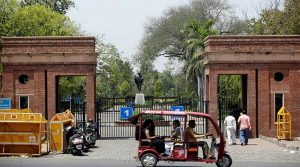 The experts say that these mafias desperately search for candidates who won’t hesitate in paying a price for securing admission to DU. The varsity advised aspiring students to not be deceived by these claims that admission is possible in DU without meeting cut-offs. The claims are completely false that it is possible to get a UG seat in any of the DU-affiliated colleges by just paying money.

If they fall for such claims, they would not get admission and will also have to bear a huge loss of money, the experts warned. Experts added that DU’s admission process is completely secure and there is no scope for rigging in it.

“Admission mafia gang loots huge amounts of money from students by making claims of getting their admission in DU colleges with the help of fake documents. Students and their parents become victims of such frauds and have to face problems. Such cases are seen every year,” said Former DU Dean and admission expert Dr. Gurpreet Singh Tuteja.

Dr. Tuteja said that the admission process of DU is completely foolproof and online. “Still, if any person is claiming to get you a seat in a college, then immediately inform the DU administration and police. By doing this, you will save yourself from becoming a victim of fraud and also help other students in getting saved from mafias,” he said.

In case anyone is caught in any admission fraud then subsequent legal actions will be taken against the accused student. The guilty will have to pay penalties and their chance of getting into the university will be denied. There is no chance that the abnormalities go unnoticed. There is a great probability of getting caught in verification rounds. Every document gets thoroughly verified and later if documents are caught fake then the candidate will have to face severe problems.

“On the basis of fake documents, fraudsters may get you admitted to a college. However, during cross-checking of documents, you and your parents will be caught. Your admission will be cancelled, money will be wasted and legal action will be taken against you,” he also added.

University of Delhi’s admission process for nearly 70,000 seats for UG courses began on August 2. It will end on August 31. According to the admissions department, as of August 17, 3.18 lakh applicants had registered for various UG courses but only 1.47 lakh had completed their payments. The first cut-off is likely to be out by October 1.