Delhi University drop-out arrested after robbing people by offering them lift in cab robbed from Noida. Four other culprits along with him were arrested by Muradnagar police on Friday night. The police acquired robbed cab, mobile, ATM card, gun and an airgun.

B.com student Luvkush is said to have dropped studies because of mere loss of interest and started criminal activities along with his other partners. Other robbers namely Sandeep and Vikas have also been identified as Delhi residents. 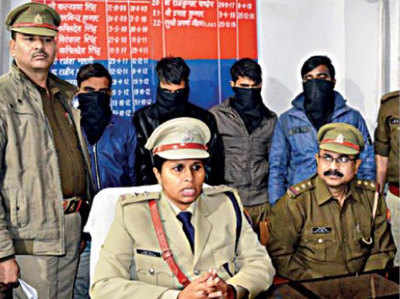 According to sources, Luvkush and his partners robbed an Ola cab forcefully from the driver by scaring him through an airgun from Noida sector-63 on 24th January and drove it to Ghaziabad. They dropped the driver at a deserted place and robbed him of his mobile and wallet. They robbed another man of his iPhone and ATM card in the name of giving him a lift while their drive to Meerut. They even asked him the ATM pin on gunpoint but failed to withdraw cash. In Modinagar, they offered a cab on lower fares to a man and robbed him too. They had plans of doing something big, but they were caught by the police.

During the investigation, they told the policemen that they used only airgun during the course of robbery. They told that usually victims protested and in order to control themselves of firing a shot due to anger and saving themselves of causing a murder is the reason why they kept only an airgun with them. However, they used to keep a gun for their protection as well.

The police is trying to investigate the source of the airgun. Also, they are trying to gather information about their other fellows.