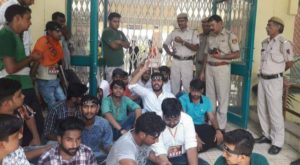 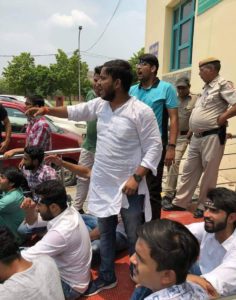 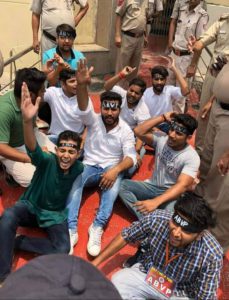 Angry over being denied help desks and entry to college premises before 2:30pm till 19th July, led to protests by ABVP unit KMV on 27 June,2018.

All of this started when Keshav  Mahavidyalaya held a referendum on 2nd May 2018, to determine the students verdict on institution of college’s students’ union and affiliation to DUSU. It is very despairing to see that for all these years the college neither had its own Students’ Union nor was it a part of DUSU. This points to the highly undemocratic atmosphere prevailing in KMV. The student rights & freedom have been curbed completely at the hands of college administration and head.

In the wake of undergraduate admissions, ABVP unit of KMV sought the permission to organize help desks for the students in order to solve their admission queries. Initially, they were permitted. However, on the first day of admission (19th June) not even a single help desk was allowed (despite the fact that how crucial help desks are during admission procedure), apart from this all the college rooms were locked, students of ABVP unit KMV were asked to vacate the college premises. It has also been reported that ID cards of some students have also been confiscated without any valid reason. This does not end here. Next day, a draconian notice was rolled out. 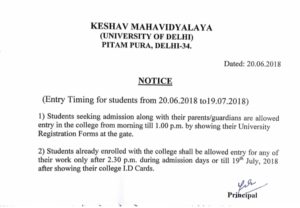 According to this notice, regular students who are already enrolled with the college have been barred entry for any of their works before 2:30 pm till 19th July, 2018. This is the height of authoritarianism !

This is against the democratic nature of DU. What if the students have some urgent work in the college before 2:30 pm ? The answer is that they will not be allowed due to this notice. All the students of KMV are highly disappointed by this arbitrary decision.

Due to this, the students of ABVP unit KMV, protested outside the college in scorching heat. They protested for help desks and entry of regular students to the college which is currently denied. On the order of Principal, police dragged the main leader, Prashant Mishra (Sangathan Mantri, ABVP Rohini).

This proves that the student’s right to protest has been curbed completely. Moreover, the police interference in college campuses with authorized orders from Proctor is wrong.

DU students want an answer to these shocking incidents of rights and freedom violations within the campus of KMV. This is Delhi university. Students have a right to protest if they feel something undemocratic and arbitrary is happening within their campus. If someone, by any means tries to curb the freedom of these students then, that authority is answerable. The Principal of the college is not ready to hold a meeting with these students inspite of repeated requests.