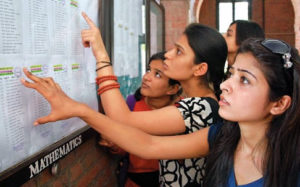 For students, the DU Third Cut Off 2018 is important because many look forward to lower percentages to get admission in college and course of choice.

More than 25,000 seats in Delhi University colleges have been filled after the release of second cut-off.

Shri Ram College of Commerce (SRCC) college closed the admissions for both of its courses – BCom (Hons) and Economics (Hons) for the general category, according to the third list released by the college.

Document verification and approval of admission in Delhi University colleges based on the third cut-off list will be held from June 30 to July 3.As per scheduled already notified, the eligible candidates who meet the requirements notified in the third admission cutoff lists are further advised to complete their admission formalities in the Colleges concerned within the stipulated time, as notified earlier on the University Website.

All the best, aspirants !