With several departments of Delhi University facing discrepancies with the recently declared results, yet another new situation arises. 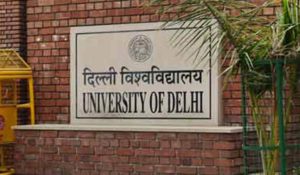 Students of Shaheed Bhagat Singh College (Day) have been marked Absent in their core paper of Eco Hons. Few students who appeared for an improvement examination in ‘Mathematics Methods for Economics’ (Semester 1) have been marked with an AB in their results.

A similar complaint has been reported from Kirori Mal College wherein an entire batch of second year of B.Sc Physical Science who appeared for SEC paper, ‘Mathematical Type Setting System Latex’, has been marked absent.

Students of Sri Venkateswara College also admitted to have faced a similar grave issue with their results which were declared in February 2020. Almost an entire batch of B.Com Program reported to have been marked an absent for ‘Economics of Regulation of Domestic and Foreign Exchange Market’ (Sem 5).

More and more number of discrepancies with the recently declared results are coming to light. Students of several departments like English Hons., Economics Hons., B.Com Hons./Program across the University have witnessed a dip in their grades. As a result, students have been trying to reach out to their College authorities and University administration for redressal to their grievances.