In India, Ganesha Chathruthi festival is going on and on the other hand, Republican Party released an advertisement in the newspaper with the image of Lord Ganesha with a message that read, “would you worship an elephant or a donkey? The choice is yours.”

The party’s county unit, Fort Bend County Republican party was the one who published the ad and Apologized and gave a clarification that it wasn’t meant to downgrade Hindu customs. 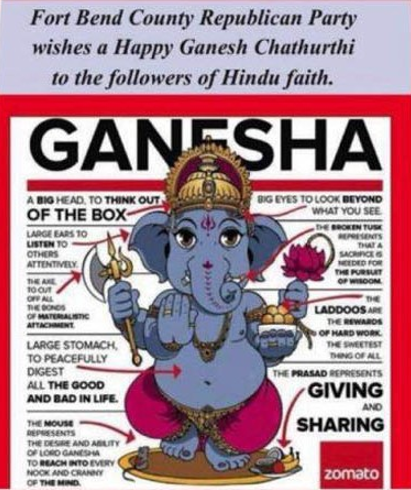 Rishi Bhutada, HAF Board Member said “While we appreciate the Fort Bend County GOP’s attempt to reach out to Hindus…, its ad, equating Hindus’ veneration of the Lord Ganesha with choosing a political party based on its animal symbol, is offensive,”

Further, he added, “Using religious imagery in order to explicitly appeal for political support should best be avoided by any political party.”

Fort Bend County Republican Party said, “The ad wasn’t meant to disparage Hindu customs… We offer our sincerest apologies to anyone that was offended by the ad.”

In the ad Lord Ganesha’s body parts were pointing out by arrows  such as “A big head, to think out of the box,” “Big eyes to look beyond what you see, “Large ears to listen to others attentively,”