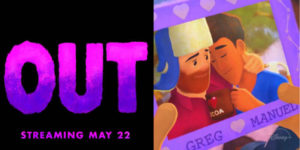 On May 23, the Pixar Animation Studios released its short film ‘Out’. A Disney+ SparkShorts Original, Out draws the first animated gay lead character of both Disney and Pixar. The movie follows the life of Greg, who is attempting to conceal his sexuality from his parents.

The initial scene in the film displays a rainbow, which is a significant figure of the LGBTQ+ community. Although the introduction of the movie says that it is based on a real account, a major factor in the film is magic. The opening scene shows two magical dogs who emerge from the rainbow. They sprinkle a ‘magic dust’ into Greg’s dog, Jim’s collar.

Greg tells his boyfriend Manuel that he will keep their picture out in the open when he moves out to the city. Even though this seems like a normal statement about the picture frame, it may be a reference to not staying in the closet anymore, or coming out in front of his peers.

Amidst his chat with Manuel, Greg’s parents visit him at his residence. Afraid, Greg asks Manuel to leave. Manuel is hurt and asks Greg to tell his parents about their relationship before leaving. Greg is helpless and tired, he looks at Jim and wishes he were a dog, which leads him to exchange bodies with Jim, courtesy to the magical collar.

The film further observes Greg’s misadventures in Jim’s body, trying to keep his relationship and sexuality from his parents. Amidst all this ruckus, the frame which held Greg’s picture with Manuel breaks.

Later, Greg’s mother is upset over the growing distance between Greg and herself. She says to Jim, “I want to tell him; I wish you find someone who loves you as much as we do, and I hope ‘he’ makes you very happy.”

It is a heart-warming scene as it exhibits that what Greg had been running away from all this while, did not require any running away from at all. It demonstrates the love and affection which parents hold for their children, despite their choices. In the concluding scene, Manuel meets Greg’s parents. As he introduces himself, Greg’s father hugs him. 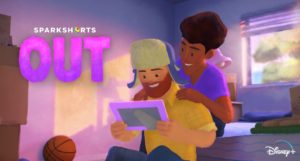 The film reflects how the LGBTQ+ community has been made to believe that they need to conceal their identity from their own family and peer groups. The fear of being judged or disappointing their family prevails over them. The helplessness Greg feels when Manuel leaves his house, with his parents at his doorstep, is stifling. It is something that every member of the community has faced at some point in their life or another.

The film is only nine-minutes long, yet it proffers the viewer clarity on numerous things. It proves to be successful in portraying its purpose. It reflects the daily conflicts of self-acceptance, the apprehension of judgement by family, and coming out. The minute details, such as the inclusion of the rainbow, or the hug in the closing scene, are what make the movie so genuine and heartfelt.

It should definitely be on your quick watchlist!