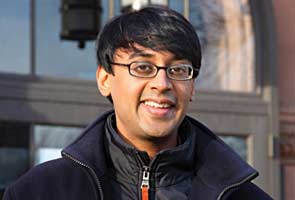 Mathematicians of Indian- and Iranian-origin are among the four winners of the 2014 Fields Medal, widely considered the Nobel Prize for maths that has been broadly dominated by white males since it was instituted in 1936.
The award going to Princeton University’s Manjul Bhargava, a Canadian-American maths wizard was no surprise; although he is the first person of Indian origin, he was the hot favorite in pre-award polls among peers.
Manjul has also collaborated with many Indian mathematicians, and his work with fellow Princeton scholar Arul Shankar, his PhD student, won them the Fermat Prize in 2011. Manjul’s own PhD advisor was Andrew Wiles, famous for proving Fermat’s last theorem.
Bhargava was awarded the 2012 Infosys Prize in mathematics for his “extraordinarily original work in algebraic number theory, which has revolutionized the way in which number fields and elliptic curves are counted.” That came on top of almost every other top prize in maths, from the SASTRA Ramanujan Prize in 2005 to the American mathematical Society’s Cole Prize in 2008.
So the Fields Medal comes as no great surprise to the mathematical community in the US or in India.

Last week, as speculation heated up about possible 2014 winners of Fields Medal, an online poll put Bhargava on top with 516 votes. Apparently, his peers pretty much expected it. Which is not surprising for someone who became a tenured full professor within two years of finishing graduate school, an Ivy League record, and the second youngest full professor in Princeton’s
history.
That’s not all. Before you think all he does is crunch numbers, Bhargava is also an accomplished table player (tutored by Zakir Hussain) and has the number on Sanskrit, which he learned from his grandfather Purushottam Lal Bhargava, was the head of the Sanskrit department of the University of Rajasthan, during family visits to Jaipur. He sees close links between his three loves noting how beats of table and rhythms of Sanskrit poetry are highly mathematical.

Such recognition came to him early. In past interviews, he has often recounted how in Grade 3, he became curious about how many oranges it takes to make a pyramid. Just as well his mathematician mother and chemist father were well-to-do: they indulged him with oranges till he figured out the answer, which was not long coming. Now he’s at the pinnacle of his calling.