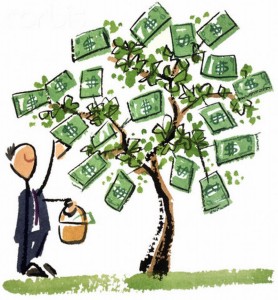 BABA: Tell me; what ails you, young man?
BHAKT (Overwhelmed to see ‘his Baba’ paying attention to him):  O! Baba! Baba, Baba, Baba! You are divine! Nothing is hidden from your supreme power!
BABA (Basking in his glory): I know. But, still tell me what bothers you son?
BHAKT: Babaji, its regarding my job. It’s been two years; I am not finding any sort of a job. What do I do, Babaji? Mujhe raasta dikhao.
BABA: Why did you not come to me two years before?
BHAKT: It’s entirely my fault Baba. I hadn’t heard of you and your chamatkaars.
BABA (Taking a mental note of regulating his publicity procedures): What sort of chutney do you prefer with your samosas?
BHAKT (Taken aback but still trying to look grave): Red chutney.
BABA: Aha! There you go! Take the green one next time and all your problems will be solved. Kripa bani rahegi!  Next please.

Reading this conversation shouldn’t shock one as religion is becoming more of a business these days. Unlike the older days when a simple temple was all one needed to worship, fashionable temples have become more of a trend today – the bigger the temple, the more the worshippers. What one does not realize is that donations made to a needy/beggar is more effective than those made for making the temple’s architecture more striking. One of the most popular of traditions in India is the one where people offer or rather pour milk on a shivling. The paradox of the situation is elicited when one sees hungry beggars sitting right outside the temple, which no one notices.

The problem is not with the religion or worshipping God, but one should not let somebody else to tell them how to pray. It’s your feeling and only you know how to express it better. So, these empty practices like removing one’s shoes outside the temple or folding their hands in a particular manner or sitting in a particular manner should not be given unnecessary importance. One can pick any religious texts for reference but this is a fact that, there is only one language that the almighty understands and that is the language of love and benevolence.

On a visit to my college, His Holiness the Dalai Lama pointed out to an interesting practice. He mentioned how people in India worship Ganesha, Krishna, and Shiva and then they engage in corrupt practices. His point was that if one wants to engage in such practices then he should only worship money. This is another problem with religion and the way its carried out by certain figures of authority called ‘Babas’ – the putting up of a charade. Off late our country has witnessed a certain amount of popular Babas being exposed. There are Babas in our country who get politically involved, sit down for dharnas and then they run off wearing women’s clothes. This particular Baba doesn’t escape from making political statements now and then. We also have Babas who have molested and raped young girls for “God” knows how many years.

The point being made here is that by bluffing millions of people, these so called Babas are constantly found playing with people’s sentiments. In a sense it is also the society’s fault which, after a certain point of time starts revering the Baba and the God is left somewhere far behind. On a parting note, I’d like to quote a famous French philosopher who makes a statement about a perfect religious man –

“Although a man may wear fine clothing, if he lives peacefully; and is good, self-posessed, has faith and is pure; and if he doesn’t hurt any living being, he is a holy man.” – Denis Diderot.