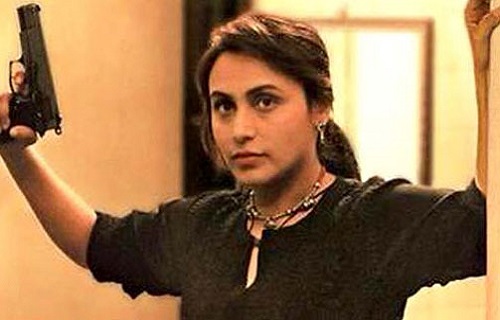 Before starting and delving into the story and reviews about movie..the foremost thing that is required is a pat on the back for the entire Mardaani team and especially Rani Mukherji who left awed us with her power packed performance. Hats off to you!
With the praiseworthy words you would have got to know that the movie pleased me to the core.
However, i am here with the full details about the movie.

Shivani Shivaji Roy (Rani Mukerji) is a senior inspector – Crime Branch. She lives with her husband Dr. Bikram Roy (Jisshu Sengupta) and her little niece Meera in Mumbai. A girl called Pyari who is known to them is kidnapped from a shelter run by a NGO. Shivani tries to find her and unearths a big human trafficking racket, which leads her to the men who run it. One of them is Walt (Tahir Bhasin) who lives in Delhi with his mother and with her help he run the business. The chase to catch the men who kidnap girls and send them to different countries for sex trade is an interesting one.

Rani Mukherji gets into the skin of the role right from the beginning. A performance like this from a seasoned actor like Rani is fabulous.The supporting cast does a fabulous job too. The music and background score are in absolute sync with the film. The editing is crisp and the running time of 113 minutes is perfect.

Mardaani is a crime drama, which is packed with action and thrills. Rani Mukerji plays a tough cop who does her job with her heart and mind. She puts in her blood and sweat to bust a human-trafficking racket. The show she puts together on the big screen is simply awesome!

After the news of the movie getting an A certificate for all the gore and blood it had in the movie,it has come out to be a real good one.

What are you waiting for! Rush to get your tickets for Mardaani and watch Rani Mukherji in action.
She will blow your mind!

A total paisa vasool and an act to remember movie.