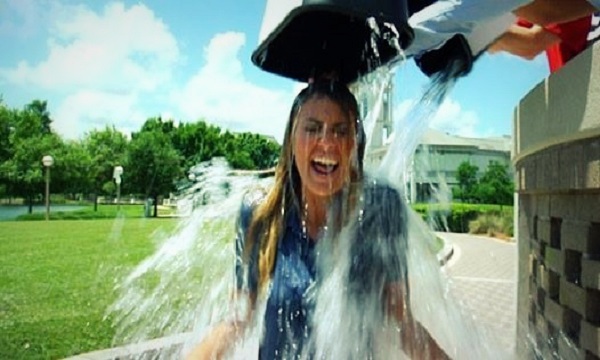 The latest news doing rounds on the social networking sites is “The Ice Bucket Challenge”.
The challenge started by ALS patient has gone viral worldwide this summer.
Started in Northern Hemisphere it has left no turf untouched..from CEO’s to Presidents..from local people to celebrities,everyone is in the challenge mood!

How did it start?
The ice bucket challenge went viral on social media after a US baseball player and ALS patient, Pete Frates, floated the idea of the challenge in a video on a social networking site. He got the idea from a friend.

What is ALS?
Amyotrophic lateral sclerosis is also referred to as Lou Gehrig’s Disease. It is a progressive neurodegenerative disease that affects nerve cells in the brain and the spinal cord.

Life expectancy:
About 20% people with ALS live 5 years or more, up to 10% live more than 10 years and about 5% live up to 20 years after diagnosis.
According to the ALS website, it has so far received nearly $23 million.

People who took the challenge:

Bollywood too couldn’t keep itself away..  Watch

More than 15 million people across social networking sites have posted about, commented or liked a post related to the challenge, according to official figures.