Delhi University on Saturday began with the mock tests series to familiarise the final year students with the Open Book Examinations which will be held later this month. 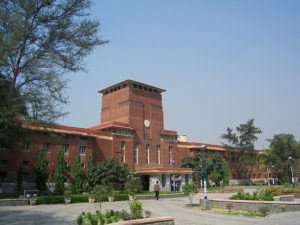 Students complained about the various problems they faced. Some reported having not being able to find their subject papers. DU teachers have come forward to support the students. They said that they were “inundated” with panic calls from students who have “nowhere to address their queries.”

Teachers have demanded the university to “stop playing with the future and career of lakhs of students” and “cancel the open book exam in the interest of physical and mental well being of students.”

Various students took to social media platforms to address their issues and demanded cancellation of exams. Twitter and other media sites were flooded with #DUagainstonlineexams and #DUagainstOBE posts.

Delhi University Teachers Association (DUTA), in an official statement, said: “For example, there was no question paper for Economics (Honours) students. The only economics papers available were for the annual system. The annual system was last taught in 2013 for regular courses and there aren’t even repeaters now, because the span period is over.”

“The DUTA strongly condemns the incompetent University administration and demands that the University stops playing with the future and career of lakhs of students and cancels the OBE in the interest of the physical and mental wellbeing of students,” DUTA said in the statement.

Teachers also criticised University Grants Commission (UGC) and Ministry of Human Resource Development (MHRD) of their “callous” attitude. HRD Minister Ramesh Pokhriyal on June 24 had asked UGC to “revise” the exam guidelines. In the meantime, many universities have put their exams on hold.

Rajib Ray, President of DUTA, said: “I am dismayed by the Dean’s statement that “All is well!” It is better to remain unavailable than to misinform and not admit crisis.I wish to tell our students that teachers are with them. We will stand by you in this hour of crisis.”