Home CAMPUS LIFE KNOW WHAT YOUR COLLEGE HAD!! Notable Alumni of Delhi University! 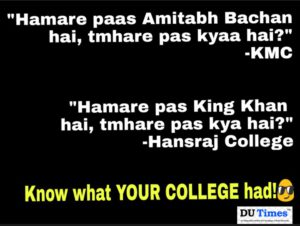 There are a lot of fascinating things about Delhi University, including its infrastructure, canteens and exciting societies which opens up different opportunities for its students. Apart from these, another fascinating aspect of Delhi University is its famous alumni., like Amitabh Bachchan from Kirori Mal College, “ye jaha khade hote hai, line wahi se shuru ho jaati hai?” Also, how can one not name the King Khan of Bollywood, Shahrukh Khan, “Don ke saamne aadmi ke paas sirf do raaste hote hai maan jaaye, ya marr jaye!?”

Here is a list of not just famous alumni from Bollywood but THE NOTABLE ALUMNI OF DELHI UNIVERSITY from their respective fields.

DELHI COLLEGE OF ARTS AND COMMERCE

Can I still get into DU with low marks?

ADMISSION Vanshika Mohila - November 13, 2021 0
The University of Delhi has released the timetable for postgraduate admissions based on merit and entrance exams. The first merit list for DU PG...

DU UPDATES Sania Saifi - November 2, 2021 0
12 Colleges of Delhi the university funded by government are facing a financial crisis due to the low allocation of funds in the budget....

ADMISSION Vanshika Mohila - October 25, 2021 0
Delhi University will release a special cut-off list today as the admission round for the third cut-off list has concluded. Students who have been...