Home NEWS Record Increase in Population of Asiatic Lions in the Country In Last... 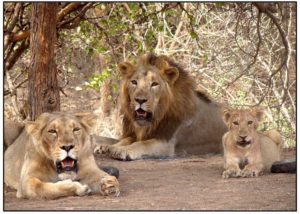 The Asiatic lions are found in the region of Saurashtra. Further, they cover a total of 9 districts in the state of Gujarat. They are found in protected and agro-pastoral areas of the region. The state has noticed continuous rise in the number of lions. The same has been enabled due to community participation, improvement in technology, etc. Other reasons behind the success are proper management, healthcare. Moreover, right steps were taken to preserve the lions in the state. The same has also happened because of less human-lion conflicts.

Prime Minister, Narendra Modi came forward and tweeted regarding the same. He further hoped to keep the trend going.

This years’ growth can be recorded as one of the highest in recent years. Last year too witnessed an increase in population of Asiatic lions in the Gir Forests.

This data of increase in population is compiled under “Poonam Avlokan of Asiatic Lions”. It is an exercise held by Gujarat Forest Department. 1400 members were deployed by forest department. These personnels use GPS location. Further, individual identification marks, radio-collar numbers are also used. This population estimation of Asiatic lions is conducted in the country in every 5 years.