Home Uncategorized Feeding the starved is a good thing, Right? 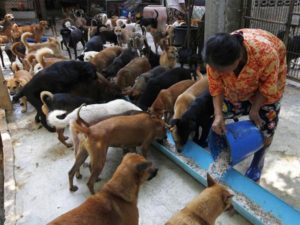 As we move into these unprecedented times, we often overlook what we can’t see inside the walls of our homes. We forget the streets we stood in every day and who we stood with. One of those forgottens are our strays. Indian streets are filled with all kinds of animals, dogs wagging their tails after crosser-bys, cats secretly peering from behind that tea staler at you lunch or herds of cows blocking the traffic but as our traffic went away so did our compassion for these animals.

A stray animal feeder is someone who takes up the responsibility of feeding the strays of a locality or area. They are mostly independent, self-driven inter-connected individuals who felt compassionately for a starved animal and then extended their love to others. Thus meaning they depend largely on community support for resources as well as assistance.

Stray animal feeders have always received a mixed reception from society, there are people like you and me who open tabs about animal offences and there are critics who oppose their work and often respond violently to their actions.

The composition of these critics usually umbrellas under uninformed and they have existed before the lockdown as well as now. They make complains like about the feeder’s compassion only limited to giving food and not shelter and his insensitivity to his fellow humans when he chooses to feed animals instead, to now risking the health of everyone around them for a few dogs.

To also mention, a different kind of critic exists too who under his prejudice for younger, cuter animals or his untaught support to animals  protests against sterilization of animals. He often forgets these animals when they get older or isn’t the one putting in the labour to take care of them.

All of this has led an unforeseen restriction on the work of the feeder community as it struggles to maintain support from the locals, in some cases feeders have even been physically assaulted when trying to work. Kiran Shekhar, Deepak are two Mumbai based

feeders who have been attacked for feeding or protecting dogs among many.

The police’s assistance is largely based on individual temperament. The local policewala’s perception of strays and feeders largely impacts the feeder’s work in the locality as his bias draws the line of comfortablity in operations. It is well observed that people who come from less are more empathetic towards these animals and their requirements. Daily wage workers and people living in slums or others with limited resources volunteer more to take care of the animals they share their neighbourhood with than well off people who often conceive them as a menace and want to get rid of them.

The Indian constitution’s article 21 proclaims to protect all forms of life, including animal life which gives Right to Life to animals and Article 51A(G), states that all Indian citizens have a fundamental duty to have compassion for all living creatures. Thus when we stop the people from helping out animals in need we are behaving not just immorally but also unconstitutionally. The knowledge of the law is the community’s best bet against these atrocities as they not just tackle these critics but also try to convert them.

The feeders also work towards protection of these animals against cruelties and taking action against animal assaulters. In March 2020, 24-year-old Delhi student stabbed 3 dogs to death, he was arrested afterwards. In case a violent crime is committed against a stray, feeders usually draft evidence and navigate a legal path road to justice. 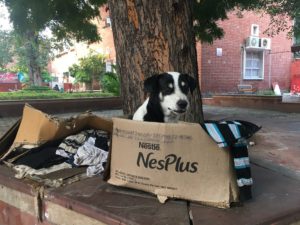 India has an estimated 30 million stray dog population and accounts to thousands of cases of rabies- related deaths and dog bites every year. To resolve this and not harm our animals in the process we need to be more endearing to stray feeders and their work. More than ever now, as these animals stay unattended with reduced food abilities on the streets while we are stay in our homes.

There has to be support from educated people like you and me to translate these lines we read to everyone around us, so that the next time someone comes with a van full of food for our dogs, we embrace them and pitch in our bit of help.

Does beauty lie in the eyes of the beholder ?

Final Exams For DU From August 10 ; Students Can Register Till July 24

Reliance Jio To Sign 13th Deal In A Row