As the month of march arrives we find the students of 12th board exams with agony and pain not just because of the exams but also the significant future decisions that they are suppose to take right after the month of March. The admissions process for UG courses begins almost at the end of May but the preparations begin beforehand. As the university is ranked on the top by many surveys in India and it receives a huge number of applications from India and beyond. However the PG admission process will be beginning from the end of March on PG Admission Portal of the university which has not yet been updated in terms of the information regarding coming upcoming admission season.

HAVE A LOOK AT LAST YEARS CUTOFF AT TOP COLLEGES: 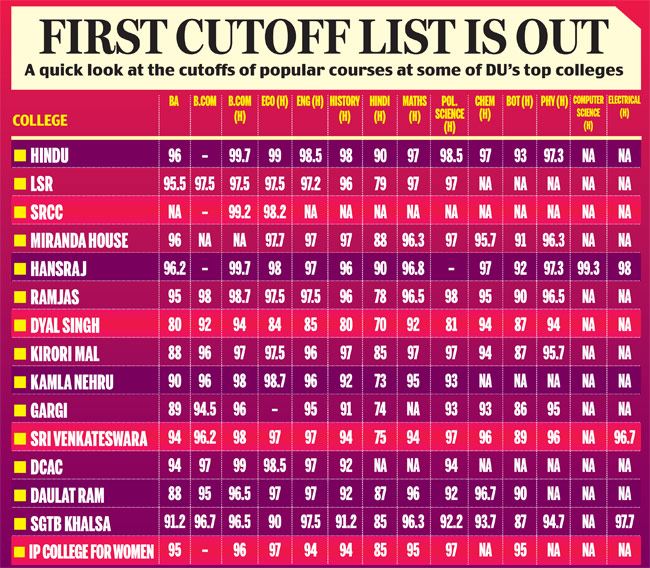 DU UG admission are done based on marks secured in the 12th board exams, except a few courses where the admissions are sought based on marks secured in a separate entrance test. UG admission aspirants are suppose to fill a pre-admission from to register themselves with the university and later the colleges release their respective cutoffs. Colleges like Jesus and Mary and St. Stephen’s have their own admission process where in Stephen’s case they hold an interview and consolidate the score of interview and the board marks which later is counted for the purpose of admission. In the list of most sought after courses comes B.com Honours and BA Economics Honours for students of commerce stream, BA English Honours and BA Political Science Honours for Humanities, and Bsc Physics Honours and Chemistry Honours for the students of Science stream. To list the most sought after colleges St. Stephen’s College, SRCC, Hindu College, Hans Raj College, Miranda House College, Lady Sri Ram College tops the list and there are many factors that makes these colleges holding top positions, these factors include Hostel availability, teaching expertise, infra and of course the name that we hear from other people.

DU PG admissions on the other hand are basically done by two separate methods dividing the number of total seats into proportions, the first category is direct admissions, this category include the marks secured at the bachelor level minimum of which is above 60%, however only the internal students of the university are eligible for this category, and the second category is admissions based on  the marks secured in the entrance test. For both the categories a separate cutoff list is announced by the respective departments. These admissions are looked after by the departments of the university, some of them assign colleges to students and some of them handle the student dealing by themselves only depending upon the strength of the intake. Although the teaching takes place at the respective departments tutorials are held weekly at the colleges.

You can message DU Times or comment any query related to admissions and it would be resolved in shortest possible time.