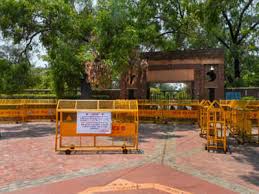 The Open Book Exams for Delhi University students were to be held from July 1. Additionally, the same were to be conducted for last year graduate and post graduate candidates.

However, the university has now postponed the exams for 10 days as of now. The same would be conducted now from July 10. This decision by the university has attracted memes across various social media sites, such as Facebook, Instagram.

Revised exam time table to be out on July 3. With students displeased with this move, some showed their anger through sharing memes on social media sites. Most students are against this system of exam. Furthermore, some believe the university facilities are not enough to conduct OBE.

Memes are shared on Twitter under the hashtag #DelhiUniversity. The same has been trending since yesterday.

The notification released also mentioned about mock tests. Additionally, the mock tests are to be held from July 4.

Additionally, various other universities have cancelled the final year exams.

Crack the DUET this year.

ALL YOU NEED TO KNOW ABOUT NORTH CAMPUS- SERIES