The University of Delhi is likely to begin its admission process for undergraduate, postgraduate, M.Phil., and Ph.D. courses by June 8, according to a tentative admissions schedule, to be discussed at an academic council meeting scheduled for Friday, May 29, 2020.

The registration portal for merit-based admissions is tentatively scheduled to open on June 8 at 10 am and will continue till 5 pm on June 30. Following this, the first cut-off list for the courses is likely to announce between August 11 and August 14. Also, for this year, the university will completely go online with the admission process from registrations to cut-off to verifications of the documents. 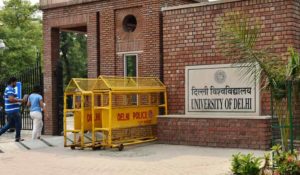 However, DU officials said, the schedule will entirely depend on the declaration of CBSE Class 12 results and the coronavirus disease situation at that time. While the pending CBSE board examinations are scheduled to be conducted between July 1 and July 15, the board has not announced the dates for the results but they are likely to be declared by the end of July.

“During the registration period, the students have to select courses details, certificates, mark sheets if their results are announced. Further, a large number of students study in schools affiliated to CBSE, and due to lockdown and riots in north-east Delhi, Class 12 board exams were delayed and some were cancelled. So, keeping in mind the social distancing norms, the University has decided to make the admission process completely online,” said an official, the New Indian Express stated.

As per the tentative schedule for the session 2020-21, the online registration portal for admission to undergraduate programmes will be re-opened for updating the class 12 marks between July 31 and August 9.

After the announcement of cut-offs, the students will need to select a college, preferred subject, submit their scanned documents, and pay the fees online. Once the admission process is done, the university may provide the students a month to visit the college and get the documents. However, the proposal has to be approved by the Academic Council and standing committee.

As reported by Hindustan Times, Shobha Bagai, the head of the university’s admission department, said that the entire process will be online this year. “The admission process will be completely administered through the university’s online admission portal. There is no offline admission for any applicant. The students will not be called immediately to the colleges for the physical verification of certificates and completion of the admission process, like before. The colleges will verify the documents online to complete the admission process to avoid gathering of students in view of the COVID-19 pandemic,” she said, adding that the physical verification of documents will be done whenever the classes begin.

The Academic Council is also expected to deliberate on any changes to be made to the selection criteria under the sports and extracurricular activities quotas. “In view of the challenges brought about by COVID-19, any change in the procedures for the personal appearance of applicants for entrance examinations for ECA, sports and music as well as for the verification of certificates shall be notified in due course,” a draft UG Bulletin reads.