Home BLOGS Due to lockdown, the usually busy and our favorite food stalls of...

Almost everyone has a hang out memory with their friends in one of those stand alone, hole-in-the-wall establishments near our colleges. These establishments serve everything, from 2-minutes Maggi to tea, coffee and other snacks at pocket friendly rates. But since the closure of college, the otherwise bustling lanes of the campus lie barren, painting a picture of gloom. 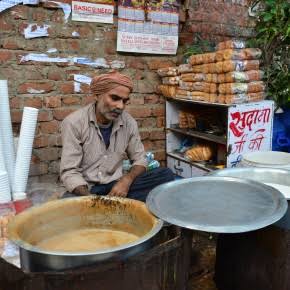 Many have even done back to their villages, due to lack of income and increasing expenses. Manager of Saroj juice hut near Arts faculty, Sarfuddin has gone back to his village in kaiserganj, UP. The shop owner called him back, but he feels there is still a lot of time before the business picks up pace. “Jiska dhanda-paani bandh ho jaaye uska guzaara kaise chalega. Maalik ka phone aaya tha ki vaapis aa jaao, lekin mujhe nahi lagta kaam raftaar pakdega kyuki zyada dikkat toh khaane-peene mein hi aa rahi hai,” he says. The shop would make a sale of around ₹ 5,000 every day and employed four people.

Manchanda snacks, established in 1997 by Satish Manchanda outside the old law faculty building, was managed by his son Vinay. The shop employed two people, both of whom left for their homes. “We would make ₹ 6,000- ₹ 7,000 per day easily because this used to be peak time for us. Now we are not sure of the future, at least till June,” he says, adding, “The losses are manifold. We would also need to do something about the expired stock at the shop once we reopen, so that’s also a financial loss we will have to incur,” says Vinay, as stated by Hindustan Times.

Some stall owners have found a way to survive in this crisis and continue business, but they too suffer from losses. “The shop is closed. We are taking orders at home, and delivering them on our own. There are only a handful of orders which we make in our kitchen. Earlier we would sell 100-150 plates of maggi, making a sale of upto ₹ 10,000 per day. Hopefully, after June 1, we will get some clarity to reopen,” says Sandeep Kataria of Tom Uncle Maggi Point, located near Ramjas College.

Our college life is incomplete without these shops. This is for the first time they have seen a crisis like this, and many other small shops and businesses have suffered as well. We can only hope their business revives and we see the sights of students sipping an evening tea, munching away on samosas and bread pakoras, ordering another plate of momos again.