Earlier, there were varied complaints by the students of Delhi School of Journalism being unhappy about the management of the college and the response they faced from the authorities. The issues raised by the students included lack of basic infrastructural facilities- a well stocked library, a media laboratory, computer lab, proper fans and lightning. One of the student claimed that, “Despite being part of a government-funded university, we have to pay a huge fee and still we lack basic facilities.”

Later, the college authorities stated the “The students are not well aware of the development in infrastructure, we have developed a new library and ordered many books, also a new media cell is in the process of being constructed. Also, some of the students are creating unnnecessary problems! The development will take time and the college will provide all the facilities.”

But, a recent ‘Leak of budget’ told a different story. 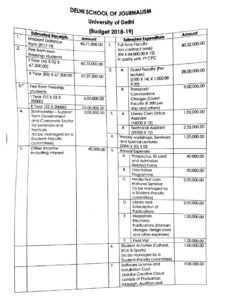 “Even after one year the basic needs like sufficient chairs in the classes is not fulfilled, on the other hand students had to sit in stand Fans in Delhi School Of Journalism. On complaint, the administration made an excuse that there was no budget for all these facilities.” said Mohammad Ali, a student of Delhi School of Journalism of Media Coordinator of NSUI Delhi.

“After the leak of Budget, the result shows that there is no record of 46 Lakhs.”
Further he added, when they questioned the administration about Media Lab they directly denied and said, “There is no use of it right now”, even after they took Rs 2000/- from each student last year for media lab.” claimed, Mohd Ali.
The question lies, if it was not necessary then, ‘Why they took this much amount from the students?’ This only shows the scam and making Delhi School of Journalism a source of income!
Concluding his statement he added, “In the name of library they just have a small room which can be occupied only by 10 students and don’t even have proper books. And after this budget leak administration is shocked and presenting the excuses.”