The WebSeries Godman which was to premiere on June 12 was suspended by Zee5. The production team has lashed out against the move. They have stated that this act was engineered by “unconstitutional and unconscionable” forces. 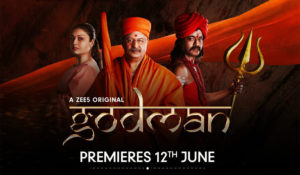 in India. Together, we must resist the stifling of our voices and ensure our ideas are heard,” the statement shared by the show’s producer R Elango on Twitter reads.

Zee5 Tamil’s Twitter released the statement: “Basis feedback received with reference to our Tamil fiction show Godman, we have decided to suspend the release of this show at this moment. The producers of the show Zee5 had no intent whatsoever of offending or hurting any community, religious or personal beliefs or sentiments.”

After the show was dropped, the show’s producer and director were both charged under several IPC sections. The charges were based on a complaint filed by an individual on behalf of ‘World Brahmins Welfare Association’.

The charges include promoting enmity between different groups, wanton vilification or attacks upon the religion, race, place of birth, residence and language of any particular group or class.

Both of them have been constantly receiving harassment calls over the past few days. As per Elango, rumours were being spread in order to turn this into a communal issue.

The 10- episode series, which was set for a digital premiere on Zee5 digital streaming platform, released a teaser which featured a comment on the Brahmin community. The fallout of the controversy it generated also saw actor ‘Daniel’ Balaji becoming the subject of online abuse.

Elango’s statement also makes a reference to this point. “Without any understanding of the story or intentions or characterisation or the context of dialogues, these groups created an uproar of hate, going by the one-minute teaser. This is an atrocious act of fascism…,” the statement says.

“This is an infinite power we must never allow anyone,” the statement reads. The production team states that they have launched a signature petition to demand the release of the web series and the same would be sent to the Prime Minister’s Office, Chief Minister’s Office and the Minstry of Information and Broadcasting.