The administration of the University of Delhi repatriated the officiating principals of Delhi College of Arts and Commerce (DCAC) and Sri Aurobindo College (evening) back to their parent college, Sri Aurobindo College (morning) in a sudden move on Sunday night. The senior-most teachers of the colleges have been appointed as temporary arrangements.

According to the provisions of the Ordinance XVIII 3(C) of Delhi University, an Officer on Special Duty (OSD) is ordinarily appointed for a period of six months as officiating principal of a college, if and when the need arises. The term can be only extended with the prior approval of the Vice-Chancellor. 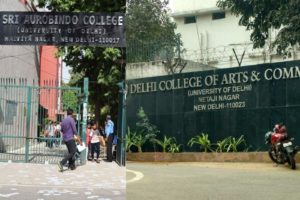 As per an order issued by the university, Dr. Rajiv Chopra who was appointed as the Officer on Special Duty (OSD) for Delhi College Of Arts and Commerce (DCAC) had completed his term long back and, therefore, has been sent back to his parent college with immediate effect. Chopra was appointed as OSD for DCAC for six months in October 2013, has completed more than six years working at this position.

“The chairperson/university representatives of the governing body of the college is requested to temporarily hand over the charge of principal to the most senior-most teacher of the college, who fulfills the minimum eligibility requirements for appointment as principal of the college,” DU’s Deputy Registrar (Colleges) wrote in a letter to the University Representative of DCAC.

Dr. Rajiv Chopra said that he was unaware of the reason as to why he was “suddenly” repatriated back to his parent college from the post of officiating principal of DCAC. He added, “I have no idea why the university administration has made this decision overnight. I have been serving DCAC since 2013 as officiating principal and was later selected as the principal, but the matter was taken to the court and it is still sub judice.”

She said, “We got a letter from the university representative of our college. Ordinarily, OSDs are appointed for six months or till a permanent appointment is made, whichever is earlier. Their term can be extended. I completed three years at Sri Aurobindo College (Evening) in April as officiating principal and have been repatriated to my parent college with immediate effect,” Hindustan Times reported.

The administration has also appointed new principals in both the colleges till further orders with immediate effect. Dr. Anuradha Gupta at Delhi College of Arts and Commerce and Dr. Kusum Lata at Sri Aurobindo College (Evening) have been appointed as new principals.