And to add to the long list of rapes that goes on in India, another rape was reported in West Bengal on March 15th. A nun of 71 was brutally gang raped by a gang of robbers. Spontaneously, there have been many discussion on ‘Ghar wapsi’, attack on minorities creating a lot of hullabaloo and once again India has conveniently ignored the grave problem. Thankfully, none has blamed the victim of going out with friends, partying, being modern, and being friends with men, going out at night or immoral dressing. It happened in a convent school where girls are taught to fear and suppress their sexuality lest God might punish them. One cannot find more religious people than nuns in their seventies. Still she was attacked and raped by three men so brutally that she had to undergo a surgery to treat her injuries. 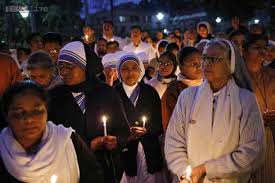 By God’s grace (yes, the phrase is intended), the victim has recovered and has fled far away from the prancing eyes of media and press. The issue was dealt with great care and sensibility of the government. The state Chief Minister has chosen her words carefully and has not luckily alleged it to be a Maoist plot. The police machinery also guarantees speedy reaction but we have too much of experience to hope that the rapists will be caught and punished. There have been many candle marches and prayers held for her recovery in Catholic schools across India. Western media has jumped into the whirlpool and highlighted the rape case showing the lack of security of women and religious minorities in India.

But reading through the lines it can be concluded that the essence is once again lost. The rapists are proving over and over again that it is not the woman’s fault to be raped. The uncontrollable brutish lust for power and sex doped with patriarchy does not care if it is a seventy year old woman or a seven year old girl. And this has happened in one of those educational institutions in India which has taught girls to be meek, polite, courteous and lady-like. This is not about religious fanaticism either. A woman is supposed to be the honor of the society and to taint her honor is to insult the society according to patriarchy. Thankfully she was a nun and no sensible politician had the nerve to touch another minority. Or she would have been another invisible case amongst the millions of rape cases in India. Had it got any limelight, then the moral polices would have found new angles on how the woman was a slut and being suggestive. Let us hope that the rapists will be caught and punished and that the nun will be able to lead a normal life. Let this case be a landmark, not just another addition to statistics.