The nationwide lockdown has left thousands of migrant workers stripped off from shelter and livelihood. The Government, concerning people, many celebrities are doing too, but anything is not enough they are facing an uncertain future. You will find stories and pain on every workers face.

One of the viral pictures of a migrant on the internet is clicked by news agency PTI photographer Atul Yadav, who tried to help him. 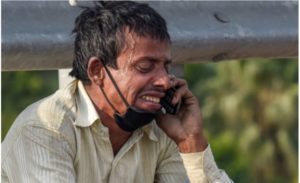 He is Mr. Rampukar a construction laborer, who pre-COVID19 worked at a cinema hall in Delhi, Atul Yadav spotted him weeping uncontrollably as he talked on the phone by the side of the Nizamuddin Bridge in Delhi. It is reported that the worker loss his only son.

This picture of a migrant worker was shared on15.May.2020 by YouTube blogger Bhuvam Bam on his official account of Twitter. After which it went viral. He added that this photo broke his heart, he prays for everyone’s well-being. 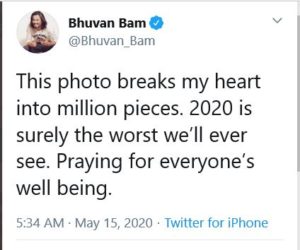 Mr. Rampukar was from Begusarai and was stuck at the Nizamuddin Bridge for three days. Eventually, he received help from a woman who gave have him food, Rs.5,500, and also booked his train ticket from Delhi to Begusarai.

The 38-year-old man, Rampukar Pandit, took a long and arduous journey from Delhi to reach his hometown amid the nationwide lockdown after learning of his infant son’s death.