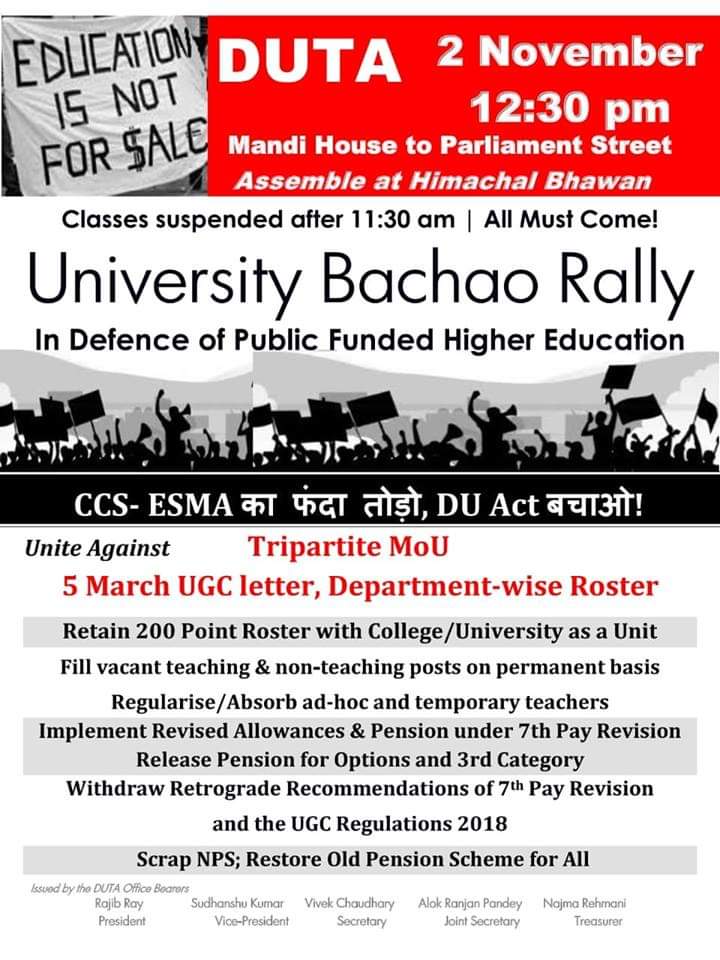 University of Delhi is facing an unprecedented governmental assault with attempts to impose the draconian Tripartite MoU, Central Civil Services (Conduct) Rules, and Essential Services Maintenance Act. These anti-teachers’ and anti-students’ provisions will seriously undermine free thinking and adversely impact academic and professional lives of both students and teachers. 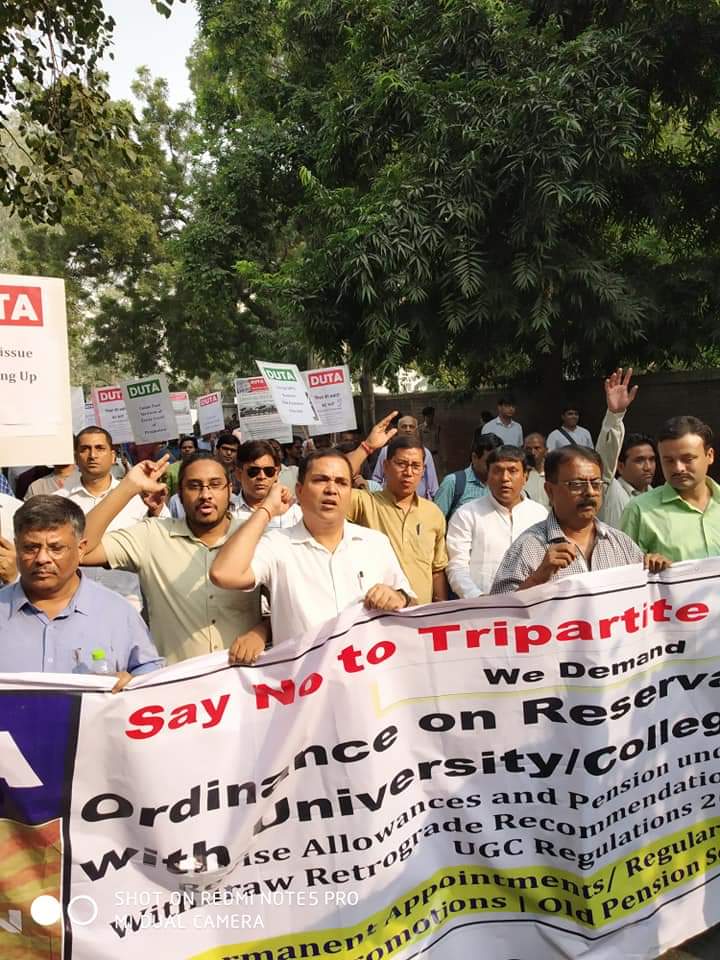 Recent attempts by the MHRD to impose CCS (Conduct) Rules, 1964 on Central University teachers and ESMA, 1968 on Delhi University teachers is a blatant attempt to crush voices of dissent in the teaching community and facilitate the signing of the Tripartite MoU. The CCS (Conduct) Rules lays down stringent punishments for teachers who write anything critical against the government in any public forum. This gagging of teachers will in turn stifle the growth of students who would not have access to alternative views about the university system, higher education, polity and society in general which is so critical to their intellectual growth.

The UGC has also set up a Working Group on 4 Oct 2018 to study DU Act with the perspective of “relevance and uniformity in today’s context” including bringing Exam/Teaching/Learning/Evaluation under ESMA. This is undue interference in the workings of the Delhi University and is a way to silence the voices of resistance among teachers through stringent measures like arrest without warrant for teachers who go on strike. Teachers never go on strike unless it is absolutely necessary to save the University. And whenever in the past, they had to take such hard decisions, teachers have always worked overtime to ensure that students don’t suffer. And students too have given total support to such movements. 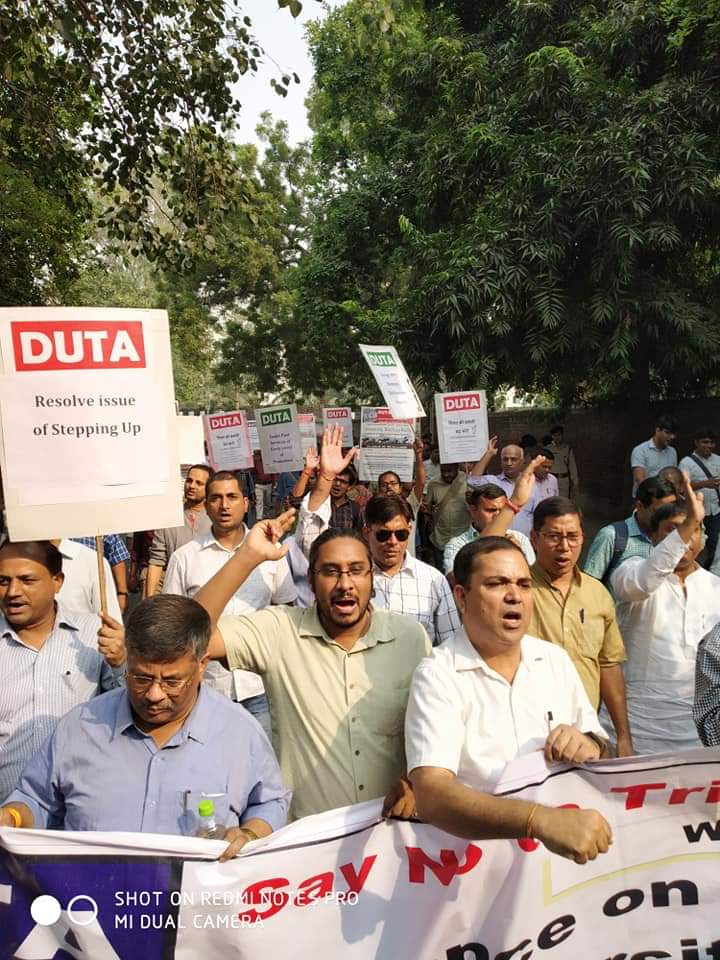 DUTA also fears that the DU Act may also be altered to allow for Autonomous Colleges and remove the right to democratic representation of teachers in Statutory Bodies in order to push forward the policy of making higher education entirely dependent on the market.

The MHRD is forcing Delhi University to sign the Tripartite MoU in order to continue receiving funds from the UGC. In the guise of restructuring universities for the purpose of reform, the government is actually initiating privatisation and commercialisation of public funded institutions like the Delhi University. This will be detrimental to the growth and sustenance of students’ interests both in the short run and the long run. If adopted, its immediate negative impact on students will be felt through astronomical fee hikes. For, this Tripartite MoU is essentially premised on the reduced government funding and a transition from grant-based economy to loan-based economy through the Higher Education Funding Authority (HEFA). In the long run, such impositions will see the exclusion of economically and socially underprivileged students including girl students from the field of the Higher Education.

The DUTA demands the immediate promulgation of the Ordinance on Reservation Roster to restore the 200 point Reservation Roster taking the University/ college as an unit so that the constitutionally mandated percentages could be met and recruitment process can resume. Presently, the UGC/MHRD has imposed freeze on permanent appointments across the Central and State Universities. Over 1700 posts advertised in DU last year are about to lapse. The MHRD had promised to bring Ordinance after stiff opposition from DUTA and other joint forums against the Department-wise roster for teaching positions. The MHRD had promised to bring our Ordinance to resolve the matter and implement again the Roster treating College/University as a Unit. Any further delay in the resolution of the matter is unacceptable.

The DUTA expresses its dismay at the apathy of the Government towards demands for just service and working conditions. Even after a year of the announcement of 7th Pay Revision, teachers are yet to receive revised allowances and pension. No steps have been taken to find a resolution to the issue of pensions for retired teachers who have spent their entire lives serving the university. No progress in release of pension has been made even in those cases that are not subjudice, namely category 3 as well as the ‘options’ category who are in GPF with pension accounts/numbers for the last twenty years.

The DUTA will once again mobilise support from political parties and raise through them these issues in the Winter Session of the Parliament.