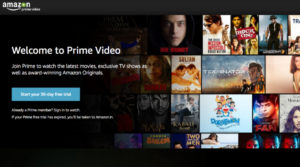 Coronavirus doesn’t let you have fun outside, but you can still have fun on the inside.Though watching something day and night either on phone or laptop might be a little straining for eyes. But sometime when you are bored and have nothing to do, this is the only thing that can amuse you.
Here are a few series on Amazon Prime video that you should binge watch.

1. Mrs Marvelous Maisel : Set in the 1950’s this series is about a woman that decides to become a stand-up comedian, after her husband leaves her. Her Life turns upside down, and this is the only choice she is left with because this is what she is good at. This might be by choice to everybody but not her. Watch this Marvellous journey of hers.

2. Homecoming : You know it’s something special of a series , if it stars Julia Roberts. She works at Homecoming, which is a facility that helps soldiers transition into civilian life. But later on after 4 years, working as a waitress and has left the facility. The series revolves around the suspense that why she left it and whats the real story behind her very less memory about it.

3. Hanna : This series begins with a compelling and interesting plot. Hanna, a young girl has been kept cut off from the outside world since birth and raised in the deep forests. The whole series is about uncovering and unearthing the truth behind, who she actually is. She tries to run away from the person she believes to be her father but is actually a CIA agent. The series contains a lot of coming of age scenes and drama carried out very well.

4. Tom Clancy’s Jack Ryan : Based on the novel by Tom Clancy, this series is a suspense thriller where Jack Ryan, who is shown to be a young CIA analyst and who thinks that his job will only be a desk job. But instead, Due to circumstances he gets caught into the field in a deadly game. His Job now has become stopping an Islamic terrorist who plans on a massive attack on US and its allies. The Series is full of action, adventure and thriller.

5. Inside edge : An Indian Sports drama series which shows the story of Mumbai Mavericks, a T20 cricket franchise playing in Powerplay League.
It follows the trials, tribulations and the triumphs when the team gets a new owner. It sets off chain of events including greed, politics , ambitions, etc. Highly addictive and difficult to predict, it will surely keep you on the Edge.