On May 5, 2020 operation Samudra Setu was launched by the government of India. It was a part of the national efforts to evacuate the Indians from overseas amidst the pandemic. This operation has succeeded in bringing 3,992 Indians from the foreign countries by sea. And, is now finally culminated after evacuating the Indian folks from the overseas.

This operation lasted for about 55 days and involved sailing of the ships to more than 23,000 kilometres by sea. Indian Naval Ships namely, Jalashwa, Magar, Shardul, Airavat were involved in this operation. 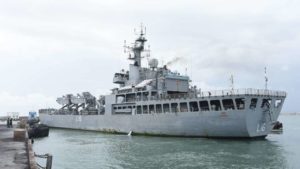 This pandemic has created various challenges for the Navy and the seafarers due to the compact environment. Major challenge confronted by the Navy was to prevent any outbreak of infection on board the ships during the operation. Rigorous safety measures were undertaken during the evacuation process on the ships including medical precautions to social distancing.

The ships used for the operation were specially equipped for dealing with the Covid-19 outbreak. The Sick Bay or the clinics on board had proper instruments and facilities related to Covid-19. Basic medical amenities were made available to the evacuees during the journey.

Women officers including military nursing staff were also deployed for the travelling women passengers. One of the expectant mothers who undertook the passage, Mrs Sonia Jacob, also gave birth to a baby boy at the ship on the International Mother’s Day.

The commendable work of the Indian Navy allowed the return of the 3,992 Indians to their homeland. Earlier also the Indian Navy has participated in such evacuation operations like that of Operation Sukoon in 2006 (Beirut) and Operation Rahat in 2015 (Yemen).