Delhi University Student’s Union, led by NSUI was launching its first ever Delhi University Magazine today, with the event ‘Freedom of Speech’ were prohibited from entering the venue. They claim that pre-bookings were made for the programme but the University cancelled the event at the last moment!

Ruchi Gupta, AICC Joint Secretary and NSUI Incharge blamed ABVP for curbing the freedom of speech stated that, “ABVP are a bunch of goons, they only understand the language of guns and stones they do not understand the language of discussion and dialogue and today, when the NSUI led DUSU was launching a magazine, first time in Delhi University’s history of 96 years, their constitutional right was curbed!
Comparing it to the Ramjas issue, she further stated that “ABVP has changed their tactics to curb freedom of expression! Earlier, ABVP used stone pelting but this time, they just went silently to the administration and pressurised them to cancel the programme. ABVP simply is ‘anti’ to any kind of dialogue, the former ABVP DUSU President brought guns to the DUSU Office. This, showed the face of ABVP.” said, Ruchi Gupta.
Concluding her statement she said, “ABVP people are thugs and goons and its time for the Delhi University students to decide whether, they want thugs in the university or a student organisation that promotes critical thinking and freedom of speech.”
Another Chief Guest, Siddharth Vandarajan, former editor of The Hindu and The Wire now called it a stupid step by ABVP and BJP. He said “Freedom of expression means everyone should have an equal say and opportunity but the present government seems to be curbing our freedom of expression. ABVP pressurised the University Authorities to cancel the permission. But we won’t stop, we stood up and launched the magazine infront of the barricades showing them that freedom of expression and constitution is alive inspite of all their steps to suppress our constitutional rights! This is a sad state for the University as well as the country.” 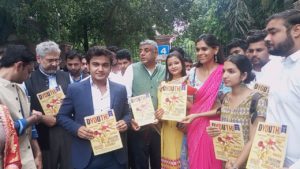 Later, they peacefully launched the magazine outside Arts Faculty infront of the barricades.