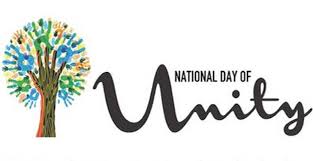 National Unity day (also known as Rashtriya Ekta Diwas) is celebrated every year on 31st of October by the people all through India to commemorate the birth anniversary of Sardar Vallabhbhai Patel who played important role in unifying the country.

He was born on 31 October, 1875 at Karamsand, Gujarat. By profession, he was a barrister, statesman, a leader of Indian National Congress and one of the founding fathers of the Republic of India. He worked hard as a social leader for the Independence of country and integration of people to make a united and independent nation. He died on 15th of December in 1950 at Bombay State with massive heart attack. ‎He was posthumously conferred with Bharat Ratna, India’s highest Civilian honour, in 1991.

The aim of introducing this event is to pay tribute to the iron man, Sardar Vallabhbhai Patel, on his birth anniversary by remembering his extraordinary works for the country