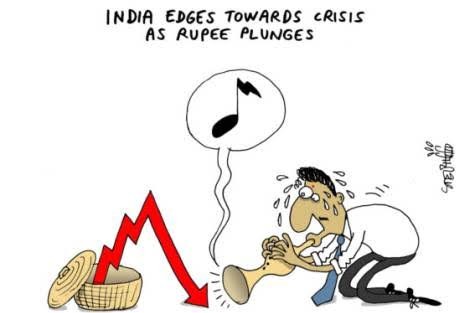 The clock keeps ticking , the sun sets down to rise up with a new hope for a better tomorrow. Colonial rule died and   ” HINDUSTAN” came as the biggest democratic power. Years and decades of selfish , congested, nepotism , area bounded and ideology centric politics crushed the dream of new born India to secure a healthy position with all around development and prosperity.

Man power to natural resources , geographical position to economy , talent to opportunity. Where do we lag ?
The problem is not just one. They start with your birth certificate and ends with the stamp on your death certificate. The problem could be the surname , state , school or the university you are in.
If you are rich then why are you rich ?
If you are poor then why are you poor ?
Well , there is no solution and no answers to these problems. The one who are accountable are lost in the chains of hypocrisy and corruption .
Nothing has changed till now but smart phones and social media.
We are still fighting for religion , caste , reservation , water and a seat in elections where the world is working for better future and sustainable development.

In the present context of India , where the economy and manufacturing sector is on a positive roll thus waiting for reforms to boost the sluggish pace of development. Manufacturing and R&D sectors are catching foreign eyes and Indian ventures too. After the economic crash down of the world , India is the only sweet spot left for the global investment . The budget for ’16-17 will speak the rest.
While on the other side the exports have observed the 13 month low figures , sensex is going down to 20,000 figure and actions of few state and non state actors of home and neighbours are disturbing the balance of our society .
I can see every state burning in a different fire , it might be politically , ideologically or community aired.
JNU to jadhavpur university , Patel’s in Gujarat to Jat’s in Haryana , Kashmiris to North-Eastern part everyone is fighting for freedom , ideology or reservation. I cannot see a united Indian soul in any state. Where are we going ? What has happened to us ?
Raising anti-India slogans , killing and raping women on roads , disrupting government property is a democratic way to protest for rights ?
Why the politics is affecting us this much ?
Have we lost our own stand ?
There is no individuality left?
Almost 70 years have gone , lets analyse what we have achieved.
* We have fought 4 wars with our neighbours.
* Pakistan still remains to be the Thakur of sholay.
*Railways is in ruins as it has always been.
* India remains to be the biggest importer
Of arms and fuel.
* Farmer’s suicide have become a political  rang manch. Kuch din chillao , fayada uthao aur patli gali nikal lo.
* Knowing the natural resources of fuel and metals , 0 has been excavated in digits.
* Red-tape in ease of business still welcomes the foreign investors .
* Fight for reservation is getting uglier and uglier.
* That time in India has come when supreme court has to issue a notice that only a flag which is 207 m high and 65 kg in weight will only bring the feeling of nationalism .
* Scams from coffins of martyrs to Bo force artillery , rice to medicine , 2g spectrum to mid day meal. Kuch to chodh do Bhaiya.
* ” Maa Ganga ” and ” Maa Yamuna” have turned into sewers. Modi ji ke aane ka intjaar tha , 5 saal me sab sahi Ho jayega.

This will go on and on. There is no end to it.
But , there is one thing we need to do for ourselves. We have to think that the person , party , religion , community we blindly  follow really works for the betterment of the well being ?
Do they tell us the right thing ?
Or they never really show us the right path.
These are the questions we have to ask ourselves.
As I see , there is no “me” in India .
Every person has excerpts of  religion, caste , race , place , community and politics downloaded in them and a name is given for identity. There is no individuality left.
We have to break this chain and aid the sectors responsible for Indian crisis. THE PROBLEMS  must not be kept in cold stores now. The accountable person have to respond.
We cannot  let this rust the growth of our nation .
Take your stand.
Vote who deserves.
Raise your voice for wrong
If the government is serious enough to think and act for the betterment , it needs your contribution too.
It will take time to get back on track and time is all we have.

By Ayush Verma For DU Times